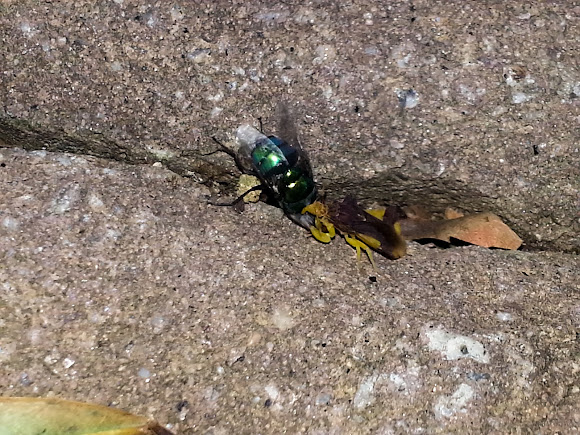 Six-legged, golden and brown. Thin overlapping wings. Oddly prehensile proboscis (reminds me of a tapir or shrew's nose). It is interesting to note the shape of its abdomen - like that of a paper plane (as you can see in my poor sketch), with sides that curve upwards. Forelimbs most certainly specialized for latching onto prey - jointed much like those of a mantis, but with piercing stakes on the ends.

Unsure - it was obviously hunting here, but I frequent this spot and have never seen this creature before.

A strange insect, discovered when it grabbed a fly from out of a crack in some bricks. They struggled for about 15 minutes before the fly tired. During this time, the beetle(?) kept "probing" the fly with its proboscis and flipping it over, as if to find a point at which it could pierce the fly's carapace. Judging by its forelimbs and prehensile proboscis, I think it may be some sort of assassin beetle or a nymph of one. (There have been a lot of assassin bug spottings in my area recently)

Interesting Insectivore insect. Hard to ID. Yellow body and legs with some kind of sucking mouth and front legs almost mantis like. Can't wait for the ID. I tried looking but no luck. Maybe someone else can.