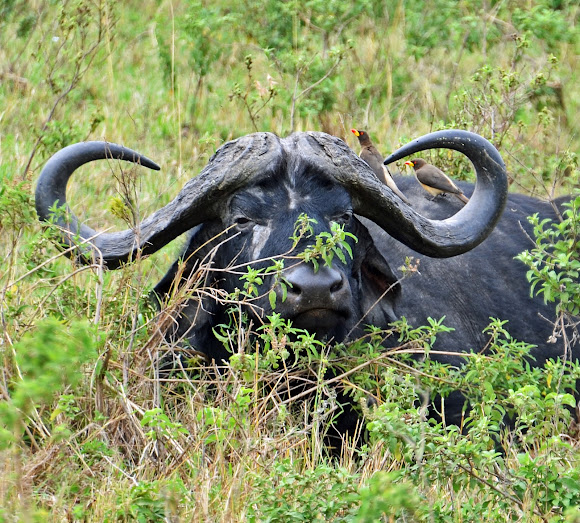 Reputed unpredictable and dangerous, this large bovine, also known as Cape buffalo, is one of the most feared inhabitants of the African savanna. The two individuals shown in this spotting were part of a herd encountered in the Masai Mara.

Savanna with water available. Once widely distributed in sub-Saharan Africa, its distribution has shrunk due to hunting and disease. Full distribution can be seen at http://www.ultimateungulate.com/Artiodac...

Of all the animals in and around Masai Mara buffalos seem to be the most feared by the locals, and they were on a constant look out for them. While when left alone these animals appear quite placid, disturbance can induce aggressive and unpredictable behavior, and dozens of people fall victim to buffalo goring or stampeding in Africa every year. Because of this, unlike its Asian counterpart it has never been domesticated. The animal on the 3rd shot looks like he may have been ready to charge. In any case we moved away as we were obviously disturbing him. The birds grooming the buffalos for external parasites are yellow-billed oxpeckers (Buphagus africanus). You can see them working on zebras at http://www.projectnoah.org/spottings/729...

I love the oxpeckers doing their job on his back!

I stayed at quite a few camp sites around the Mara, and when something is outside your tent and only canvas is between you and it, all breathing stops and the heart pounds like a drum. I swear I could hear it. All part of the African experience, and at times it is dangerous. At the same site, lions entered the camp one evening, but that's another story.

That must have been scary Neil! They're definitely to be taken seriously. A young shepherd boy had recently been killed by one right next to our camp; thank goodness we were on an elevated platform. But then every noise keeps you awake at night!

A grumpy old male not known for his sense of humour. I was chased by one of these at Cotter's Camp, just outside the NP. Trees come in very handy. Great pics, Daniele.

@KarenL, just to let you know that Peter has now made your symbiosis mission global. You'll find it listed under Global Missions.

Thanks Malcolm, I was aware & am trying to sort it! :)

Hi Karen, at the moment your mission is centred in USA but the spottings to start are in Africa so maybe you can move the circle to Africa. You will need to contact Peter to get a mission upgraded to Global but that should not be a problem in this case. You can use the contact link at the bottom of the page. In the meantime we can sometimes get hold of Peter on our chat and mention it to him, that should help. I think I have quite a few spottings for you also, not just Africa but many other places, especially with Cattle Egrets!

When we were in Kruger we had to stop because of animals on the road in front and then some Buffaloes walked right by the car just a few feet away I guess the animals there are mostly used to cars so just choose to ignore them.

Thanks Daniele! I'm hoping it will attract some very interesting spottings!
Perhaps you can also let me know how I make this a Global mission, as currently it is officially a local one.

Karen I've just added my relevant spottings to your mission! It's a great mission idea!

Daniele, I've created a new mission for Symbiotic relationships & would appreciate it if you could add this spotting!
http://www.projectnoah.org/missions/7987...

Look like a dashing male in second picture.... Nice spotting..!!

The domesticated ones are way smaller and different than the Gaur.

Sad about the gaur... I've only seen the domesticated form, which I think is a hybrid.

Of course I would never get close to a guy like that. Gaur is bigeer yes but almost extinct I guess.

Definitely one for the telelens Satyen; you don't want to get too close to this guy. I believe the gaur is actually even bigger.

Wow! lovely closeup and great info, thanks for sharing. Almost close to the Indian Bison (Gaur).

Thank you avatb and Atul! I also saw plenty of oxpeckers on giraffes (still to come). Interestingly the elephants kick them off on landing... you won't see a single oxpecker on any elephant on my elephant spotting...

fantastic pics and info as usual

I especially love pictures that show how different species interact, like the ox-peckers on these Cape Buffalo. Lovey series of photos!