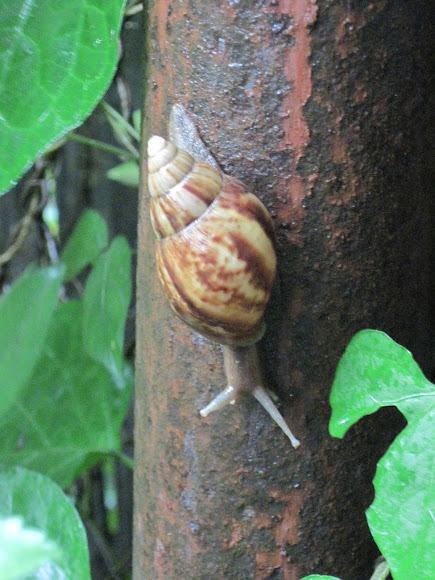 The adult snails have a height of around 7 centimetres (2.8 in), and their length can reach 20 centimetres (7.9 in) or more. The shell has a conical shape, being about twice as high as it is broad. Either clockwise (sinistral) or counter-clockwise (dextral) directions can be observed in the coiling of the shell, although the right-handed (dextral) cone is the more common. Shell colouration is highly variable, and dependent on diet. Typically, brown is the predominant colour and the shell is banded.

The East African land snail is native to East Africa, especially Kenya and Tanzania. Its habitat includes most regions of the humid tropics, including many Pacific islands, southern and eastern Asia, and the Caribbean. It is a highly invasive species, and colonies can be formed from a single gravid individual. The species has established itself in temperate climates also, and in many places release into the wild is illegal. The giant snail can now be found in agricultural areas, coastland, natural forest, planted forests, riparian zones, scrub/shrublands, urban areas, and wetlands.

Thank you Atul. Will have it named.