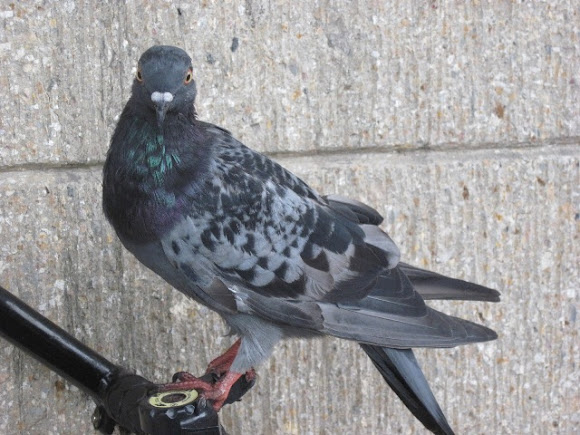 The adult of the nominate subspecies of the Rock Dove is 32–37 cm (12–14½ in) long with a 64–72 cm (25–28 in) wingspan.[11] Weight for Rock Doves ranges from 238 to 380 grams (8.4-13.4 oz).[12] It has a dark bluish-gray head, neck, and chest with glossy yellowish, greenish, and reddish-purple iridescence along its neck and wing feathers. The iris is orange, red or golden with a paler inner ring, and the bare skin round the eye is bluish-grey. The bill is grey-black with a conspicuous off-white cere, and the feet are purplish-red. The adult female is almost identical to the male, but the iridescence on the neck is less intense and more restricted to the rear and sides, while that on the breast is often very obscure.[4] The white lower back of the pure Rock Dove is its best identification character, the two black bars on its pale grey wings are also distinctive. The tail has a black band on the end and the outer web of the tail feathers are margined with white. It is strong and quick on the wing, dashing out from sea caves, flying low over the water, its lighter grey rump showing well from above.[10] Young birds show little lustre and are duller. Eye colour of the pigeon is generally orange but a few pigeons may have white-grey eyes. The eyelids are orange in colour and are encapsulated in a grey-white eye ring. The feet are red to pink.[7]

The Rock Dove has a restricted natural resident range in western and southern Europe, North Africa, and into South Asia. The Rock Dove is often found in pairs in the breeding season but is usually gregarious.[4] The species (including ferals) has a large range, with an estimated global extent of occurrence of 10 million km². It has a large global population, including an estimated 17–28 million individuals in Europe[1] Fossil evidence suggests the Rock Dove originated in southern Asia and skeletal remains unearthed in Israel confirm their existence there for at least three hundred thousand years.[5] However, this species has such a long history with humans that it's impossible to tell exactly where the species' original range was.[16] Its habitat is natural cliffs, usually on coasts. Its domesticated form, the feral pigeon, has been widely introduced elsewhere, and is common, especially in cities, over much of the world. A Rock Pigeon's life span is anywhere from 3–5 years in the wild to 15 years in captivity, though longer-lived specimens have been reported.[14] The species was first introduced to North America in 1606 at Port Royal, Nova Scotia.[10]