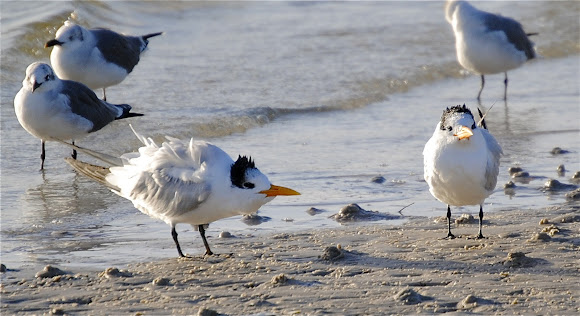 Cool Facts: • The Royal Tern makes its nest scrape on the ground on low-lying islands. The pair defecates directly on the nest rim, perhaps to reinforce the nest against flooding. After a few weeks, the nest rim hardens. Young Royal Terns leave the nest scrape within one day after hatching and congregate together in a group known as a crÃ¨che. Eventually all of the chicks in a colony come to the crÃ¨che, which can have thousands of chicks ranging in age from two to 35 days old. A pair of Royal Terns will feed only their own chick, and manage to find it in the crowd, probably by recognizing its call. http://www.allaboutbirds.org/guide/Royal...

There was a large group of birds standing together at the shore line. Black Skimmers, Sea Gulls, Royal Terns and Sandwich Terns. These Royal Terns look similar to the Sandwich Tern but they are larger and the beak is orange instead of black.