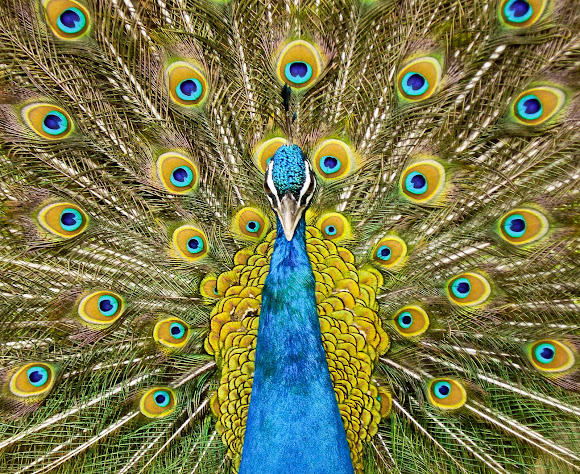 The Indian Peafowl or Blue Peafowl (Pavo cristatus) is a large and brightly coloured bird of the pheasant family native to South Asia, but introduced and semi-feral in many other parts of the world. The male, peacock, is predominantly blue with a fan-like crest of spatula-tipped wire-like feathers and is best known for the long train made up of elongated upper-tail covert feathers which bear colourful eyespots. These stiff and elongated feathers are raised into a fan and quivered in a display during courtship. The female lacks the train, has a greenish lower neck and has a duller brown plumage. They are found mainly on the ground in open forest or cultivation where they forage for berries, grains but will also prey on snakes, lizards, and small rodents. Their loud calls make them easy to detect, and in forest areas, often indicate the presence of a predator such as a tiger. They forage on the ground, moving in small groups and will usually try to escape on foot through undergrowth and avoid flying. They will fly up into tall trees to roost, however. It is a bird that is celebrated in Indian and even Greek mythology and is national bird of India.

The Indian Peafowl is a resident breeder across the Indian subcontinent and is found in the drier lowland areas of Sri Lanka. In South Asia, it is found mainly below an altitude of 1800 m and in rare cases seen at about 2000m. It is found in moist and dry-deciduous forests, but can adapt to live in cultivated regions and around human habitations and is usually found where water is available. In many parts of northern India, they are protected by religious sentiment and will forage around villages and towns for scraps. Some have suggested that the peacock was introduced into Europe by Alexander the Great,while others suggest that the bird had reached Athens by 450 BC and may have been introduced even earlier.It has since been introduced in many other parts of the world and has become feral in some areas.[

This beautiful Peacock was found in a cage in Shri sringeri shankar mutt, Sringeri, Karnataka, India.... I was watching it keenly and it suddenly came towards me and opened itz feathers as though it was posing for me and asking me to take its photo... It was a magical moment for me that i can never forget in my life...:)

It is a very, very, very beautiful bird. We like its colours. The feathers have like beautiful eyes.

Thank you so much Bhargav, harsha, cranbook & finib2..:)

Thanks for the compliment Daniela..!

Just gorgeous, thanks for sharing.

Thank u cecihelper1.. Yeah.. It does look like a painting..!

that´s right and the picture shows it at it´s best.

Thank u Hansnew.. Peacocks look fantastic when they spread their feathers to dance..:-)

Thanks for the info lgCostaNut.. I have added this pic to that mission..:)

Thank u very much for the compliments Blueidone..:)