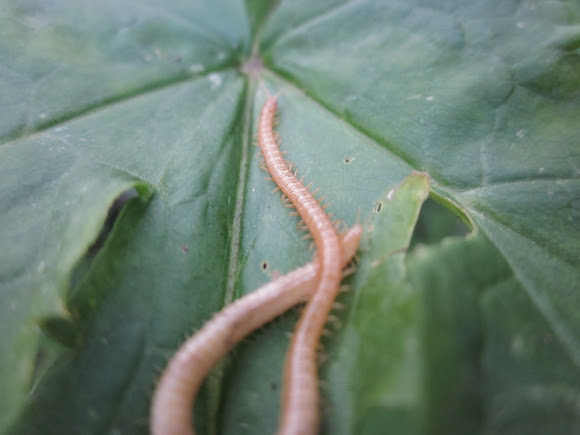 The Geophilomorpha bear upwards of 27 leg-bearing segments. They are eyeless and blind, and bear spiracles on all leg-bearing segments — in contrast to other groups, who only bear them on their 3rd, 5th, 8th, 10th and 12th segments — a "mid-body break", accompanied by a change in tagmatic shape, occurring roughly at the interchange from odd to even segments. This group, at 1260 spp. the most diverse, also contains the largest and leggiest specimens at 29 or more pairs of legs. They also have 14–segmented antennae. The group includes four families: Mecistocephalidae, Neogeophilidade, Geophilidae and Linotaeniidae

Worldwide there are estimated to be 8,000 species of centipede, of which 3,000 have been described. Centipedes have a wide geographical range, reaching beyond the Arctic Circle. Centipedes are found in an array of terrestrial habitats from tropical rainforests to deserts. Within these habitats centipedes require a moist micro-habitat because they lack the waxy cuticle of insects and arachnids, and so lose water rapidly through the skin. Accordingly, they are found in soil and leaf litter, under stones and dead wood, and inside logs. Centipedes are among the largest terrestrial invertebrate predators and often contribute significantly to the invertebrate predatory biomass in terrestrial ecosystems

Centipedes (from Latin prefix centi-, "hundred", and pes, pedis, "foot") are arthropods belonging to the class Chilopoda of the subphylum Myriapoda. They are elongated metameric animals with one pair of legs per body segment. Despite the name, centipedes can have a varying number of legs from under 20 to over 300. Centipedes have an odd number of pairs of legs, e.g. 15 or 17 pairs of legs (30 or 34 legs) but never 16 pairs (32 legs). A key trait uniting this group is a pair of venom claws or "forcipules" formed from a modified first appendage. Centipedes are a predominantly carnivorous taxon --> soil centipedes or slender centipedes, i canot decide AND i don't know which possible candidates i have not seen, yet.