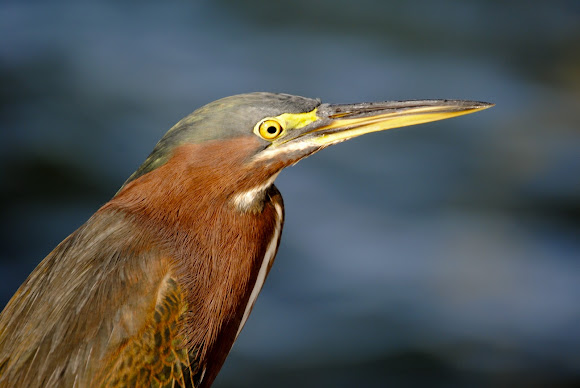 The Green Heron is relatively small; adult body length is about 44 cm (17 in). The neck is often pulled in tight against the body. Adults have a glossy, greenish-black cap, a greenish back and wings that are grey-black grading into green or blue, a chestnut neck with a white line down the front, grey underparts and short yellow legs. The bill is dark with a long, sharp point. Female adults tend to be smaller than males, and have duller and lighter plumage, particularly in the breeding season. Juveniles are duller, with the head sides, neck and underparts streaked brown and white, tan-splotched back and wing coverts, and greenish-yellow legs and bill. Hatchlings are covered in down feathers, light grey above, and white on the belly.

The habitat of the Green Heron is small wetlands in low-lying areas. The species is most conspicuous during dusk and dawn, and if anything these birds are nocturnal rather than diurnal, preferring to retreat to sheltered areas in daytime. They feed actively during the day, however, if hungry or provisioning young. Shore-living individuals adapt to the rhythm of the tides. They mainly eat small fish, frogs and aquatic arthropods, but may take any invertebrate or vertebrate prey they can catch, including such animals like leeches and mice. Green Herons are intolerant of other birds - including conspecifics - when feeding and are not seen to forage in groups. They typically stand still on shore or in shallow water or perch upon branches and await prey. Sometimes they drop food, insects, or other small objects on the water's surface to attract fish, making them one of the few known tool-using species. This feeding method has led some to title the green and closely related Striated Heron as among the world's most intelligent birds. They are able to hover briefly to catch prey.

Thank you for the nice comments and the IDs. I'm so glad to know what it is.

Wow, what a beautiful bird - love the colors! Great captures!