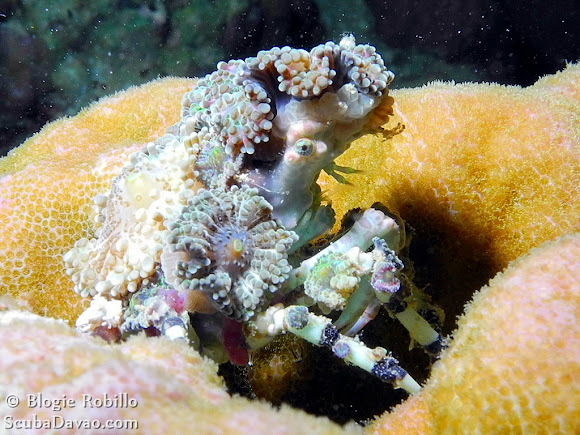 Also known as Corallimorph Crab, Decorator Spider Crab and Tubercle Crab. They feed on plankton and invertebrates, and grow to about 5cm in length.

Found on coral and rocky reefs covered in a heavy growth of marine organisms usually corallimorphs hence the name! Widespread in the Indo-Pacific region.

I shot these photos during a night dive at a dive site called Limao Reef, near Samal Island, Davao, Philippines. I was at a depth of less than 10m.

@theark8 - This is a kind of crab that comes out at night. It covers its body with live corallimorphs (corallimorphs are like sea anemones).

Wow, this is amazing !

THIS, sir, is amazing all around. Great job!

Oh WOW this is a Photo of photos Blogie fantastic capture :):)