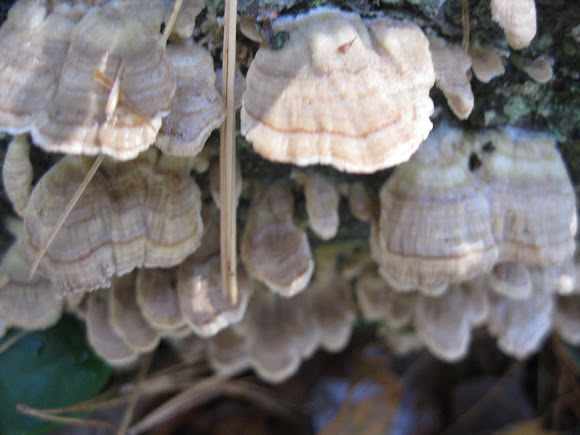 乃工尺匚卄 ㄗ◯ㄥㄚㄗ◯尺モ The kingdom is Fungi The phylum is Basidiomycota The class this fungi is in is Agaricomycetes The order is Polyporales The family is Fomitopsidaceae The genus is Piptoporus. This Birch Polypore was found on a dead birch tree lying on the ground.On November 1st and then again on the 14th in 2011. We found this in the woods. It was 13 1/3 celsius . At the end of fall. When I identified the area it was partly sunny, and very cold out! The group I am in figured out that the fungi that was in the sun had a lighter color to it. The fungi was white and had a light brown/tan color to it. It did not have a cap or a stalk. The gills were unattached. Their was no spore print, and no collar. Some trees that are near by are oak,pine, and birch. When we found the fungi it was very dry, and had no odor. This fungi came in a big group. It was the only fungi in the area. I found this information at http://en.wikipedia.org/wiki/Birch_polyp...

I have a polypore but mines not a birch polypore, i don't know what type it is yet.

Here are some photos of birch polypore http://www.projectnoah.org/spottings/782...

Are you sure about your ID? This looks more like false turkey tail - http://www.mushroomexpert.com/stereum_os...

Were you able to sample one of the mushrooms?

He meant... he found the same mushroom but he submitted a different one.

I found the same mushroom but I sumite it but I did a differant mushroom.