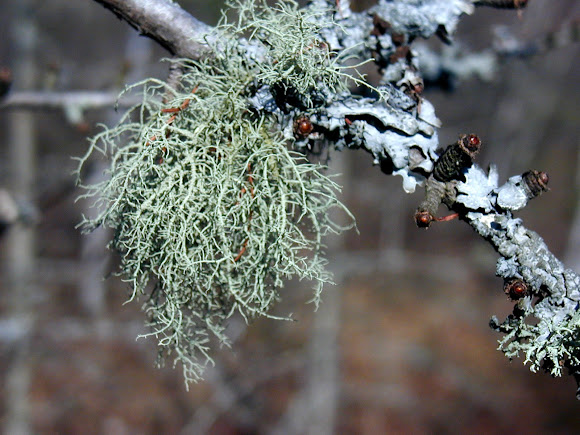 This lichen was growing on a tree and there were lots of the same type of lichen around it.

Looking For Lichen On January 18th 2012, Mr. P took out his classes to look for lichen. Our mission was to try to identify all of the living things on the Massabesic Middle School campus. It was 3 degrees Celsius outside. It was very chilly and the wind was blowing wicked fast. There was about 24 centimeters of snow on the ground. The first lichen we found was not very far in the woods. This lichen was bright green. It was growing on a tree. This mushroom had many limbs that were extended out from it. This lichen had many of the same lichen growing around it so it must be a popular species. All of the species that we found of this were on trees. None of them were on the ground. I looked up this lichen on the internet to try to find out what this mushroom was. Finally, I found a site that told me that my lichen might be a “ Beard Lichen” So, I looked around and I found out that the beard lichen was found in Maine and also the scientific name is Usnea. So that made me more confidant about my conclusion. I think this lichen is a Beard Lichen.

I really liked how you were very descriptive with your field notes and where you found the lichen. Although next time, I would make sure you have pictures that are less blurry. It was very good how you showed scale in the photos, which helps it be identified. There was a question that I had, were there any other species of lichen other than itself? But great job with your work and I did learned a little more. We should compare information because I came up with the same thing!

nice spotting,
please, consider to add it to the Lichens mission:
http://www.projectnoah.org/missions/8624...