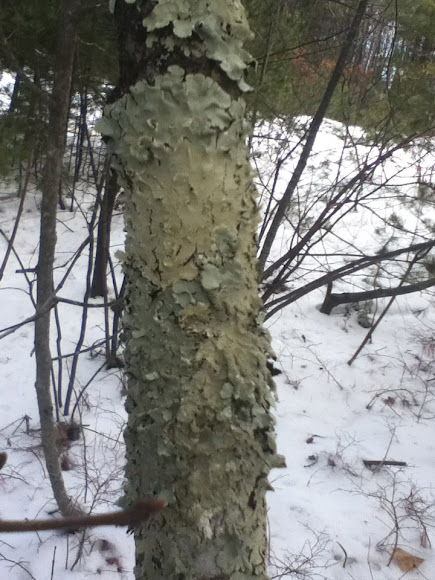 Characteristics on the lichen I found: The lichen I found was about 13cm long and it went all the way around a branch. Also the lichen was a very light green. And the lichen had no spaces in between the branches of the lichen. When I found the lichen it was growing in the middle of the branch. If I were to, I would of touch it to see if it were rough but it was so cold to take off my gloves. Classification: Kingdom: Fungi Division: Ascomycota Class: Lecanoromycetes Order: Lecanorales Family: Parmeliaceae Genus: Flavoparmelia

We found most of our lichen on alive trees. We only found one lichen that was actually on a dead tree. Also Green Shield lichen mostly grows on oak and maple trees, and that's what trees I found the lichen on. Our lichen was found sort of in the middle of the woods but the woods wasn't that big. I think there were all of the same kind of lichen all around.