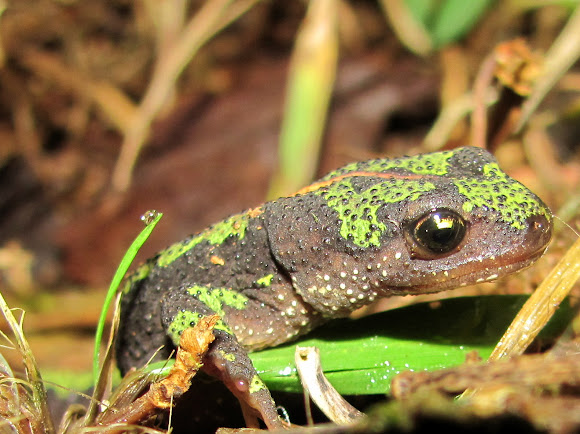 Marbled newts have dark brown or black bodies with irregular patterns of green. They have black bellies with off-white specks. Adult females have an orange stripe running down the back from the head to the tip of the tail. Juveniles also have this stripe, but it fades on males at about 9 months. Breeding males have a large wavy crest that runs from its neck down to the tip of its tail, but is a little bit shorter were the tail meets the body. The crest is striped yellowish-white with black. Adult Marbled Newts are from 5 inches (13 cm) to 6.5 inches (17 cm) long

Marbled newts live throughout most of France, and northern Spain west to the top third of Portugal. They have a slight overlap with the Pygmy Marbled Newt (T. pygmaeus), which take over southern Spain. Marbled Newts are absent from a lot of the Pyrenees because of dry and unstable conditions. In northern France the populations are more scattered due to the presence of the Great Crested Newt (t. cristatus), which the Marbled Newt hybridizes with to some extent. The higher elevation Mediterranean climates are the preferred habitat of Marbled Newts, and in the overlap, T. pygmaeus takes the lower elevations.

"Orientation toward breeding ponds plays an important role in the seasonal movements of amphibians. In this study, adult marbled newts were tested in a circular arena to determine sensory cues used to locate breeding ponds. Animals were collected from a temporary pond situated in northern Spain, taken to the experimental site 340 m distant, and tested for orientation under a variety of conditions (i.e., orientation under a clear night sky, orientation under an overcast night sky, and orientation under a clear night sky in the presence of an altered geomagnetic field). These investigations have demonstrated that the marbled newt is able to orient using celestial cues. Animals chose a compass course in the direction of their breeding pond only when celestial cues were available. Conversely, the ambient geomagnetic field does not seem to be relevant to orientation of marbled newts since they were unable to orient themselves using the ambient geomagnetic field in the absence of celestial cues."(Journal of Ethology September 2002, Volume 20, Issue 2, pp 137-141 Celestial orientation in the marbled newt (Triturus marmoratus) Javier F. Diego-Rasilla, Rosa M. Luengo) My 2000th one :-) imagine our surprise in finding this species,that we only spotted once,in a wild habitat(river homem félinhos beach http://www.projectnoah.org/spottings/164... ),in our yard :-) amazing our own Marbled Newt ,so after almost a year of that spotting where is it the gorgeous Marble newt spotted in my backyard,to celebrate my 2000th :-) iam happy

Thanks very much Marta for your kind words,yes i think there are salamanders in belgium,search in very mosty and not freezen places and in the nigth :-)

Superb spotting! I am friendly jealous! I know there are newts and salamanders here in Belgium but still did not get to see them :-)

Thanks very much Leuba for your kind words

Congratulations Antonio ! Well deserved !! and thank you for the interesting information on these newts.

Thanks very much to all of you :-)
Dilan Chathuranga,akshaya,Carol Snow Milne,NuwanChathuranga,Saumya Wanniarachchi,LuisStevens,Bhagya Herath,namitha,staccyh,Pedro Beirão and Tiz ,thanks for your's nice words

Congrats on the SOTD. Great series!!

Congrats on your spotting of the day and your 2000 th submission my friend! Great job :)

Congratulations! This is awesome news.

Wow Karen,what a great honor again,thanks for the choise,my marble newt is a star :-)
And thanks all of you for your support and allways nice words.
Project Noah have been for me ,an amazing experience of learning about nature and a "gold mine" in what concern of finding new fantastic friends and great people to share our love and concern about wild life.Thanks all
Iam happy :-)

Super Congratulations on SOTD! So happy for you.

Congratulations Antonio, your 2000th share has also earned you Spotting of the Day honors!

The marbled newt is a fascinating amphibian; studies have shown that it uses the stars to navigate to its breeding ponds.

Jemma my friendvery thanks very much for your allways supporting words:-)

lovely capture!! Congratulations for reaching 2000!! I am glad i checked your page ! Your photography is superb! presented artistically. Your compassion and empathy for wild life comes thru!!

Wow,iam touched by your awesomes comments,thanks very much my friends,for your's support,iam a lucky guy to haved you people us friends,thanks for all of you :-)