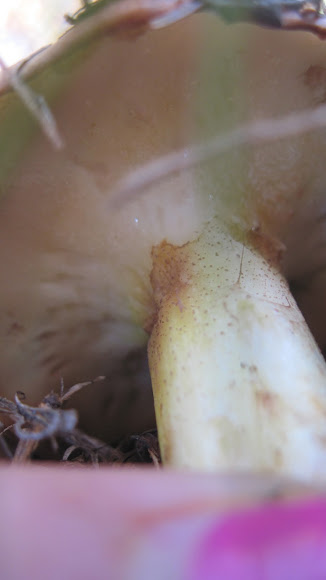 All the mushrooms were either on the outline of the woods or in the woods. It was wet snow was on the ground just not a lot. And they were either on a tree or under some prickly bushes.

short ones long ones stubby ones and most definitely the ugly ones. pink ones red ones and orange ones. My group and I found a handful of mushrooms. The mushrooms were very short and small but most were cute at the same time. Their was one that looked like a fat ugly potato because of the colors and how big it was. In my group we found about seven, eight or nine mushrooms and they were red, orange a couple brown and a small pink one. They were usually all the same shaped round tops with slimy gills underneath. But one orange one had a top that looked like a saucer. It was really cool looking. And I can not believe how many different mushrooms there were. About half the amount of mushrooms we found were on the outline of the woods. And the other half were in the woods. I wonder how many mushrooms are on our campus? And how many we walked right by and didn’t even see? I am sure that there is plenty others. The trees that were surrounding the mushrooms were mostly pine and a couple oaks. I didn’t really pay attention to a particular oder that they had. But they probably had one. They were all around each other. Probably a meter or two away from each other.

I don't think it is the puff ball because it doesn't have that round shape and the fuzzy top.