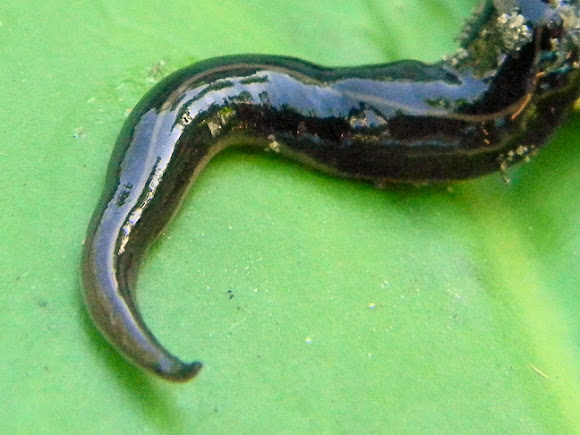 This is a tentative identification however the specimen does conform to the description "This flatworm is relatively large, about 40 to 65 mm in length and about 4–7 mm wide. Its body is however quite flat, being less than 2 mm in thickness. Both ends of the animal are pointed, but the head end is more pointed than the tail end. Near the tip of the head end are two eyes. The color of this animal is dark brown on the upper surface, with a lighter central line. The underside is pale grey." Platydemus manokwari was was first discovered in New Guinea (manokwari is a name from western NG). "Found exclusively in human-modified habitat, especially urban and public gardens in litter and under rocks and rotting logs; also in damp places in well-treed gardens. Under very wet conditions may be encountered crawling on pathways and up the sides of buildings. Introduced into north Queensland from New Guinea. Transported around the Pacific with cultivated plants. Feeds on native and introduced snails and other litter fauna. Introduced to some Pacific Islands to control the Giant African snail pest." Interestingly a shell from this snail appears in the 2nd photo. "It is in the top 100 of the worst invasive species and is seriously threatening endemic snail species in some Pacific island nations."

Spotted in a food garden in a semi-urban area with houses, food gardens and a disturbed patch of remnant lowland rainforest nearby.

Placed on a taro leaf (Xanthosoma sagittifolium) in images 1 and 3 just for the photographing.

Due to similar recent spottings here on PN and the interest they engendered, I have revisited my spotting and I think I have identified it to species :-)

You are welcome, Gilma!

Thank you so much, S Frazier.
I learned so much. : )
I did had then both, Leeches (one was a huge one!!) and Flatworms.

They are in different phyla (a higher level taxonomic group). Leeches belong to Annelida and flatworms, Platyhelminthes. In form annelids have segmented bodies, flatworms are unsegmented. Over half of flatworms are endo parasitic (mine here is not as it is a part of the Planariidae family); most leeches are blood suckers, and most are aquatic. A terrestrial leech of mine can be seen here http://www.projectnoah.org/spottings/761... and here http://www.projectnoah.org/spottings/117... and these two ARE blood suckers!

Mine looks just like it but the yellow line was very thick! and it acted like a leech! Are you saying flat worms are not leeches?...