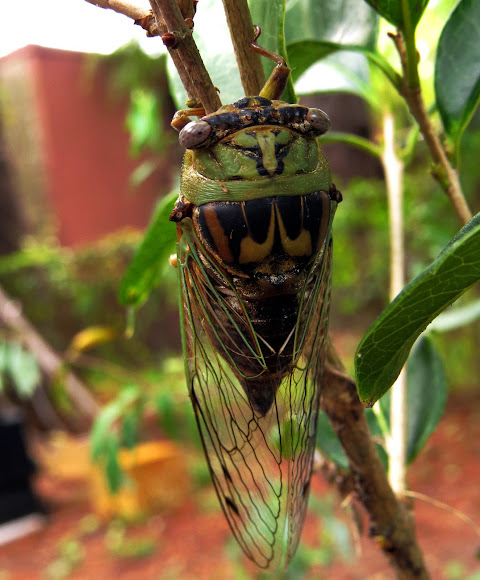 Definitely a Cicada, I believe female 13 year Magicicada from our area. about 1.5" in length excluding wings. Primarily green and black with warmer yellow/brown accents, have small patches of iridescent/shiny golden fuzz on connecting segments of their backs and grey-blue eyes. Most have been found on sidewalks lying upside down.

They have recently within this week and last week (septemeber 7th-18th) been appearing all over the city in areas with lots of vegetation. This one was found on the side walk facing the street in front of local McDonalds. Some are crawling out of tall grass grown in the McDonald's garden, and falling out of, or flying into the live oak trees over the garden. there are also several elephant ear plants around. There are at least 4-5 more Cicada appearing here every day.

They appear to be flying into the windows of a local McDonald's restaurant and stunning and even killing themselves on the glass windows of the building. The ones that I have not relocated are being stomped on by either employees or general public. The few found alive are mostly are unresponsive to being handled. I have collected a few and moved them to my home only a mile or so away so that they may survive the glass tragedy.