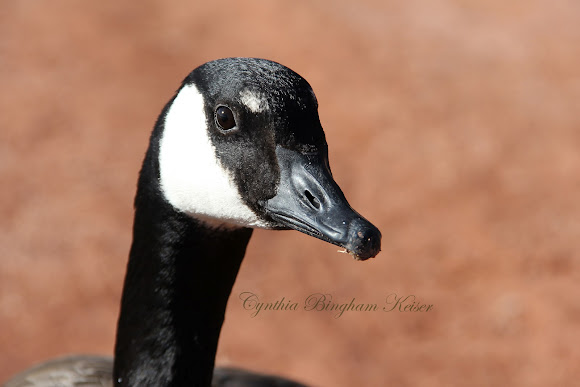 Gray/brown goose with black head, neck and tail. It has white from ear to ear stretching under its beak. This bird has a small white mark above the eye. The fourth image shows the "V" formation in flight. The last shows its droppings. I was thinking perhaps this is has some Branta canadensis maxima in it causing the white above the eye but I'm not sure.

City Park lake in Fort Collins. "This species is native to North America. It breeds in Canada and the northern United States in a variety of habitats. Its nest is usually located in an elevated area near water such as streams, lakes, ponds and sometimes on a beaver lodge. Its eggs are laid in a shallow depression lined with plant material and down. The Great Lakes region maintains a very large population of Canada Geese." - Wikipedia

When I was little, there use to be enormous flocks of these geese that would darken the sky enough to make people stop walking and look up. They're considered a pest leaving droppings everywhere and bacteria growing in it. They're also very loud, especially in large numbers.

http://www.harteman.nl/omnibus/anserifor...
Cindy this link might help. There are cackling geese with this white eye patch to. Run down the page to see those.Let me know what you think.

Mine is the same size as the others too.

I've some in photo's as well. I know the Branta canadensis maxima has white above the eye but they're also the largest one. This goose was the same size as the others so I was wondering if it was a mix.

I saw one similiar to this one yesterday in Georgia. Only one here with the white above the eyes, that I have seen.

Does anyone know if this is a ssp causing the white above the eye? Perhaps a hybrid with the Giant Canada Goose, B. c. maxima?

Hi Emma, wow, it's really difficult to tell. I'll keep at it though!