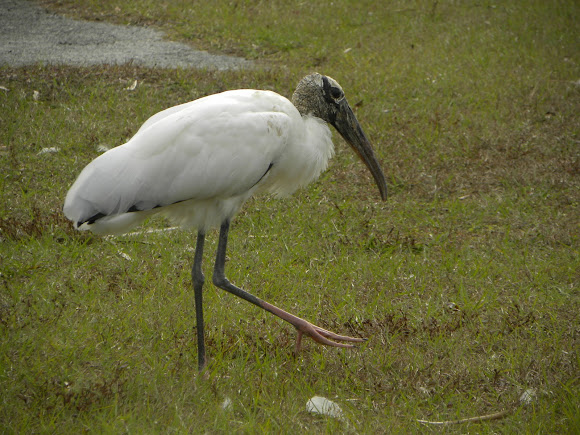 Listing Status: Endangered These Wood Storks come to the West Coast of Florida, near the Gulf of Mexico every January. During the summer, I never see them. The Word Stork is an Endangered Species in the United states. Wood storks are large, long-legged wading birds, about 5O inches tall, with a wingspan of 60 to 65 inches. The plumage is white except for black primaries and secondary's and a short black tail. The head and neck are unfeathered and dark gray in color. The bill is black, thick at the base, and slightly curved. Immature birds are dingy gray. The southeast United States breeding population of the wood stork has declined from 20,000 pairs in the 1930's to about 10,000 pairs by 1960, and to a low of approximately 5,000 pairs in the late 1970s. Nesting occurred in the Everglades. The generally accepted explanation for the decline of the wood stork is the reduction in food base " small fish', to support the breeding colonies. This reduction is attributed to loss of wetland habitat as well as to changes in water levels from the draining of wetlands and constructing levees, canals, and floodgates to alter water flow in south Florida. The current population of adult birds is difficult to estimate, since not all nest each year. Presently, the wood stork breeding population is believed to be greater than 8,000 nesting pairs (16,000 breeding adults). Nesting has been restricted to Florida, Georgia, and South Carolina.. A second separate , non-endangered population of wood storks breeds from Mexico to northern Argentina. Storks from both populations move northward after breeding, with birds from the southeastern United States population moving as far north as North Carolina on the Atlantic coast and into Alabama and eastern Mississippi along the Gulf coast, and storks from Mexico moving up into Texas and Louisiana and as far north as Arkansas and Tennessee along the Mississippi River Valley. There have been occasional sightings in all States along and east of the Mississippi River, and sporadic sightings in some States west of the Mississippi and in Ontario. Loss of nesting habitat (primarily cypress swamps) may be affecting wood storks in central Florida, where nesting in non-native trees, other factors known to affect nesting success include prolonged drought and flooding, raccoon predation on nests, and human disturbance of rookeries. U.S. populations are endangered

Nesting has been restricted to Florida, Georgia, and South Carolina.. A second separate , non-endangered population of wood storks breeds from Mexico to northern Argentina.

Amazing shots, sad that they are Endangered :(

Hi, Thanks Emma, I joined the mission. I noticed we can only add 5 mission to each sighting?

I did not know that! We have the summer rains.

The main months we have rain is from Dec thru March. We need the rain !!

Thank you Emma!! Im trying to improve my video skills.I have become interested in videos since I came on here and met Ashmir and other wildlife enthusiasts. "I Have to keep practicing". Yes, Florida is a lovely place to come for a vacation. Lots of beautiful beach's and Disney!! It also has a lot of wildlife. You mentioned rain? Do you have rain in the winter?

Thanks.
I saw the video. I like the way you are trying to merge the scenes. This stork has such long legs! The big egret looks elegant as usual with it's long legs and lemon bill! Considering the fact that it is endangered,good thing you have it on tape!
Florida seems to be a nature lover's delite!
We are waitng for th erains! Mid january and no rains yet!!
then every creek turns into a marsh land and we have a wetland like effect.!

Thank You, Emma!!
I looked up your flower and it has spooned leaves. "See notes I left for you".

beautiful!
http://www.projectnoah.org/spottings/850...
any reason for this?