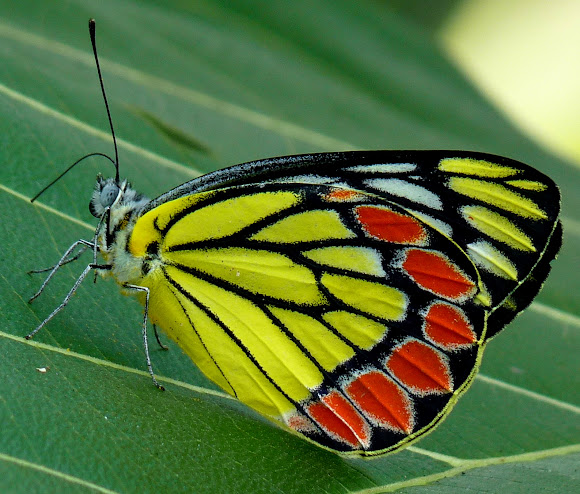 The Common Jezebel (Delias eucharis) is a medium sized pierid butterfly found in many areas of South and Southeast Asia, especially in the non-arid regions of India, Sri Lanka, Myanmar and Thailand. The Common Jezebel is one of the most common species in the genus Delias.

Generally found all over India, except in the desert tracts, and up to an altitude of 7000 feet in the hills. The butterfly may be found wherever there are trees, even in towns and cities, flying high among the trees and visiting flowers. It is commonly seen in gardens. The females can be seen flying amongst the trees in search of its foodplants, while the males are more frequently observed visiting flowers for nectar or mud-puddling. It rests with its wings closed exhibiting the brilliantly coloured underside. The Jezebel often flies high up in the canopy and usually comes lower down only to feed on nectar in flowers. Due to this habit apparently, it has evolved a dull upperside and a brilliant underside so that birds below it recognise it immediately while in flight and at rest.

Jezebels are such a beautifully vibrant genus of butterflies. Very nice photos!

You are a butterfly person! Welcome To Project Noah.!! Lovely picture!

Great work... kadavoor...
You force me to form new Mission... I am using this cute butterflyfly as its home page....!!

Kadavoor, How did you put up the link to your flickr home page? Pamela.