Pupal Basket of a Geometrid Moth 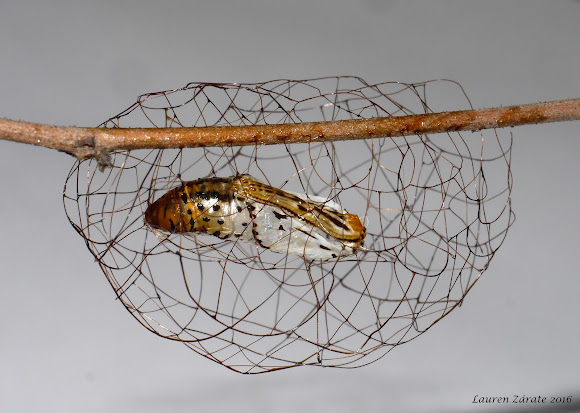 Seeing a flash of white in the bushes, I found two moths mating. The male was hanging in the air suspended from the female and the female was holding on to her pupal basket (last picture). The male escaped before I could photograph them together. This moth is in the family Geometridae, white with a yellow head and two thin wavy lines across the wings. The basket is actually a double set, with the outer basket measuring 3 cm in length, while the inner basket is only just barely larger than the pupa (see 2nd picture). The pupa is also white with some yellow and some black spots and lines. It measures 1.2 cm as does the length of the female. The male was several mm smaller, but identical in color and pattern. The basket is remarkably strong, flexible and springy, as if made from fine wire. In the 4th picture, you can see a close-up of the connections. Geometrid larvae are called "Loopers" or Inchworms and are almost always devoid of any hair or spines. She must have manufactured the basket material somehow. Looking closely at the head end of the pupa, you can see the split from which she emerged and a broken area of the basket from which she squeezed through before her wings enlarged. A male found her and mating occurred apparently before she ever flew.

Hi Lauren
Are the adult and the pupa really the same? Or just a coincidence? Do you have any info about Geometridae doing such kind of pupa?

Thank yo so much Daniele :)

Thank you Lisa! This one was so special because the moth was still there!

So glad you found yours Fakawi, they are marvelous works of engineering! Thank you hookgv :)

thanks for your help in ID-ing it!