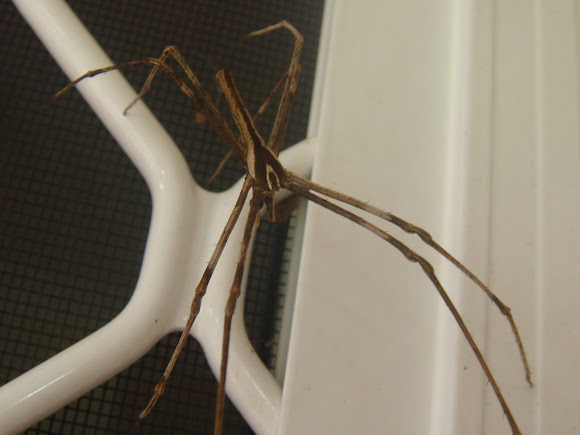 It is a nocturnal hunter, having excellent eyesight, and hunts using a silken net to capture its prey. The Net-casting spider sets its trap at night. A rectangular white net is spread between first two pairs of legs. The third pair of legs has threads to stabilise the "net". The fourth pair of legs are used to hang onto its support. When a passing insect comes near the net it splats it over the victim, and tangles it in the trap. When the males are ready to mate, they will rest on the outer skirts of the female's web, and will gently pluck the web to show her that they are interested. Once the male has mated with the female, he dies. The female then constructs a globular egg sac, approximately 10-12mm in diameter. It is generally a light brown or fawn color with black specks on it and contains anywhere from 100-200 eggs. It is usually disguised and protected by a leaf. Once the female has constructed the egg sac and laid the eggs, she will usually leave it to its own protection. After around 3 weeks, the young hatch; like most spiders, they eat the egg sac for nutrients.