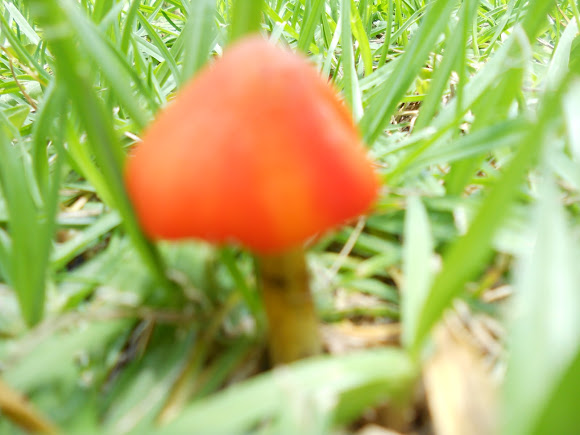 Unlike most of the red to orange waxy caps in North America, the witch's hat is relatively easy to identify: virtually all parts of the mushroom bruise and discolor strongly black. In fact, one sometimes finds older specimens that have discolored so much that they appear almost completely black. C. Ribet's photoseries, at the bottom of this page, represents the witch's hat in its various stages of development. Hygrocybe conica is the most common and widely distributed species in the cluster of species that forms the witch's hat complex. Hygrocybe singeri is similar, but has a slimy stem. Other members of the cluster include Hygrocybe nigrescens, which is inconsistently described but may differ in minor morphological features. Hygrocybe cuspidata blackens only at the stem base, if at all. I have not found the difference between scarlet and orange versions to be indicative of anything; many of my collections contain mushrooms demonstrating both colors in the fresh condition (before fading). Description: Cap: 2-7 cm; sharply to broadly conic, sometimes convex with a conic point; slimy when fresh, but soon dry or tacky; smooth or finely hairy in age; reddish to scarlet orange, often with olive to greenish tints; bruising and discoloring black. Gills: Nearly free from the stem; close; whitish, becoming yellowish orange or olive yellow; bruising black. Stem: 6-11 cm long; 5-10 mm thick; colored like the cap, white at the base; equal; moist but not slimy; fragile; splitting; often grooved lengthwise or twisted; hollow; bruising black. Flesh: Colored like the cap; thin; blackening on exposure. Odor and Taste: Not distinctive. Spore Print: White. Microscopic Features: Spores 9-12 x 5.5-6.5 µ; smooth; elliptical to irregular. Gill tissue parallel.

Saprobic under hardwoods or conifers; growing alone or gregariously; spring through fall, winter in warmer climates.

This is a hygrocybe yes, but it is not a hygrocybe conica, those have distinctly pointed caps while this one is dull, i listed the proper suggestion.