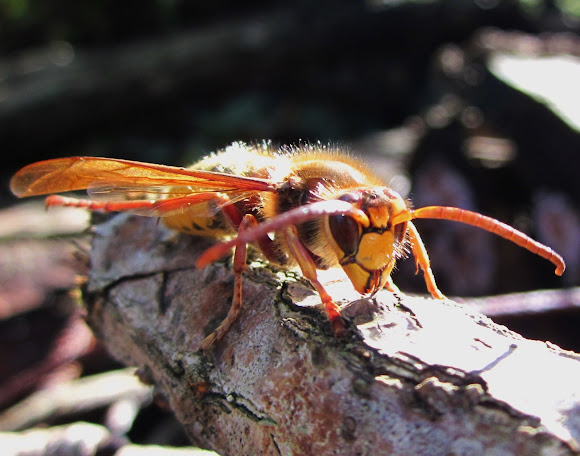 The eyes are deeply indented, shaped like a C. The wings are reddish-orange, while the petiolate abdomen is brown striped with yellow. The European hornet is larger than the common wasp, but smaller than some Asian hornet species. It has hair on the thorax and abdomen, although the European hornet is not as hairy as most bees. European hornets often have the rove beetle Velleius dilatatus living in their colonies.

The European hornet Vespa crabro, commonly known simply as the "hornet", is the largest European eusocial wasp. The queen measures 25 to 50 mm (1–2 in) long; males and workers are smaller. In males, as in most members of the Aculeata, the antennae have 13 segments, while in females there are only 12; also as in other aculeates, the male abdomen has seven visible segments, while the female has six; females possess an ovipositor modified into a sting which is not barbed. See wasp and bee characteristics to help identify similar insects. This species will sting in response to being stepped on or grabbed. They are also defensive of their hive and rather aggressive around food sources such as lilac bushes. Care should be taken when encountered in these circumstances as they may sting without warning. The pain from the sting may persist for several days with attendant swelling

thanks karen, i still have few insects, to post. sometimes i find some, i can't resist to take a piture from.