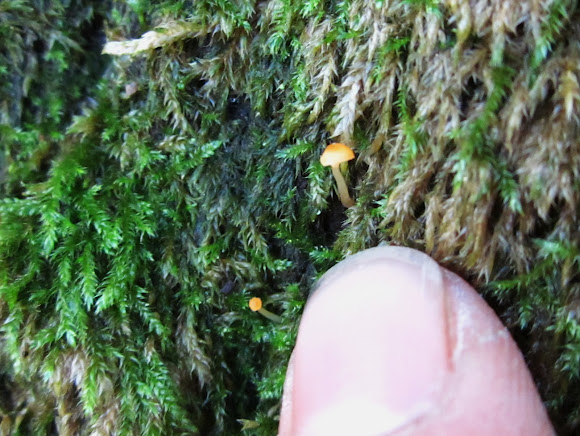 The cap is initially convex, but as it matures, it expands to a bell-shape, typically reaching 0.3 to 1 cm (0.1 to 0.4 in) in diameter. The cap sometimes has a small abrupt umbo (a central bump), and the cap margin is pressed closely against the stem when young, often flaring or curving slightly inward. As the cap expands, a narrow sterile (i.e., without any reproductive cells typical of the hymenium) band which frequently becomes lobed or irregularly-jagged often forms at the extreme margin. The cap surface is smooth, faintly translucent-striate when moist, at first pruinose but soon naked. The color is red when young, soon becoming yellowish toward the margin, and slowly fading to bright orange-yellow. The flesh is thin, brittle, yellow, and has no distinctive odor or taste (wikipedia)

The fruit bodies of Mycena acicula grow singly, in groups, or somewhat clustered on debris in wet places, especially along streams or the borders of swamps. The appearance of the fruit bodies is not significantly influenced by the effect of rainfall, perhaps because "such minute fungi are largely determined by the microenvironment prevailing under dense vegetation, etc., which is no doubt less affected by recent rain than more exposed situations."[14] The fungus is widely distributed throughout the eastern United States and Canada and occurs in Washington, Oregon, and California along the Pacific Coast.[11] It has also been reported from Trinidad,[15] Britain,[16] Norway,[7] Spain,[17] Korea,[18] and the Ussuri River Valley in the northeast of China ---- and nl --( http://www.soortenbank.nl/soorten.php?so... )

Mycena acicula, commonly known as the orange bonnet, or the coral spring Mycena, is a species of fungus in the Mycenaceae family. It is found in Asia, the Caribbean, North America and Europe. The fruit bodies, or mushrooms, of the fungus grow on dead twigs and other woody debris of forest floors, especially along streams and other wet places. They have small orange-red caps, up to 1 cm (0.4 in) in diameter, held by slender yellowish stems up to 6 cm (2.4 in) long. The gills are pale yellow with a whitish edge. Several other Mycena species look similar, but may be distinguished by differences in size and/or microscopic characteristics. M. acicula is considered inedible because of its small size -- it had an annoying size to really get a focus, i rather want it a bit bigger or smaller!! i saw the poor quallity first at home. !!