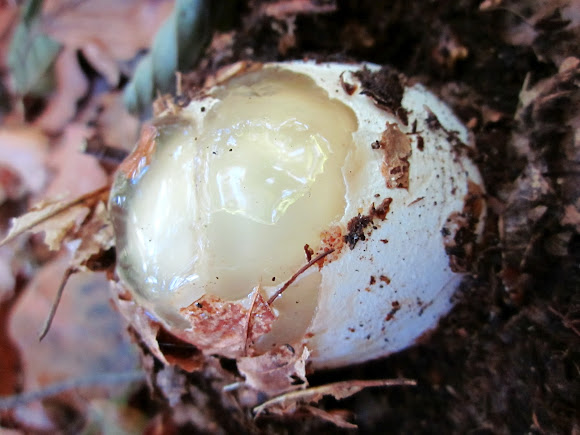 Stinkhorns are astonishing. Their abrupt appearance in gardens and lawns is frequently the cause of considerable consternation; they arise from an "egg" that results from the immature mushroom's universal veil, quickly breaking the "shell" and thrusting themselves up to heights of nearly 10 inches in a matter of hours! Phallus impudicus, a common and widely distributed stinkhorn, was named by a French mycological pioneer with a French sense of humor. He may have found a specimen like the one photographed by Konnie Robertson, to the right. At any rate, like the other stinkhorns, Phallus impudicus covers its tip with a foul smelling and spore-laden slime; flies are attracted to it, and carry the spores away as they continue on their little fly adventures. Stinkhorns have been much maligned over the years, perhaps because, like Scleroderma polyrhizum, they often appear where we don't want them: in the sterile botanical fortresses we try to maintain as our "yards" and "gardens." But unlike Scleroderma polyrhizum or dandelions, stinkhorns are extremely phallic, thrusting botanical invasion psychology into realms best analyzed by Freud. Your neighbor, stalking dandelions with a hand trowel every morning, is apparently no match for Etty Darwin (granddaughter of Charles), who "so despised stinkhorns that she mounted an antifungal jihad with the aid of gloves and a pointed stick," burning the stinkhorns in secret to protect "the purity of thought among her female servants" (Money, p. 3). Older Phallus impudicus specimens are occasionally mistaken for yellow morels. After the spore-bearing slime has been picked clean by insects, the pitted and ridged surface of the cap can resemble the cap of a morel. Since stinkhorns are hollow, and since the smell is not always as foul as it frequently is, it's easy to see why misidentification occurs. However, stinkhorns typically grow in summer, rather than spring--and a close examination will usually reveal traces of the slime. ( http://www.mushroomexpert.com/phallus_im... )

location: North America, Europe edibility: Inedible fungus colour: White to cream, Black or blackish normal size: 5-15cm cap type: Other stem type: Volva on stem, Stem much longer than cap diameter flesh: Mushroom has distinct or odd smell (non mushroomy), Mushroom slimy or sticky spore colour: Light to dark brown habitat: Grows in woods, Grows on the ground Phallus impudicus Pers. syn. Ithyphallus impudicus (L.) Fr. Gemeine Stinkmorchel Phallus Impudique, Satyre puant, Oeuf du diable, Stinkhorn. Fruit body initially semi-submerged and covered by leaf-litter, egg-like, 3–6cm across, attached to substrate by a cord-like mycelial strand. The outer wall of the egg is white to pinkish but there is a thick gelatinous middle layer held between the membranous inner and outer layers. The egg is soon ruptured, as the white hollow stalk-like receptacle extends to 10–25cm high, the pendulous, bell-shaped head is covered by a meshwork of raised ribs covered in dark olive slime which contains the spores. This slime has a strong sickly offensive smell which attracts flies from large distances, the slime sticks to the legs of the flies and thus acts as a means of spore dispersal which takes place very rapidly, exposing the underlying mesh of the cap. Spores pale yellow, oblong, 3.5–4 x 1.5–2µ. Habitat associated with rotting wood which may be buried in the soil, in gardens and woodland. Season summer to late autumn. Very common. The egg stage, which lacks the disgusting smell, is edible though not tasty; it is said to be an aphrodisiac presumably through association with its phallic shape. Distribution, America and Europe. ( http://www.rogersmushrooms.com/gallery/D... )

The common stinkhorn can be found throughout much of Europe and North America, and it has also been collected in Asia (including China,[19] Taiwan,[20] and India[21]), Costa Rica,[22] Iceland,[23] Tanzania,[24] and southeast Australia.[25] In North America, it is most common west of the Mississippi River; Ravenel's stinkhorn (Phallus ravenelii) is more common to the east.[26] The fungus is associated with rotting wood, and as such it is most commonly encountered in deciduous woods where it fruits from summer to late autumn, though it may also be found in conifer woods or even grassy areas such as parks and gardens.[7] It may also form mycorrhizal associations with certain trees.[27] [edit] Uses [edit] Edibility At the egg stage, pieces of the inner layer (the receptaculum) can be cut out with a knife and eaten raw.[28] They are crisp and crunchy with an attractive radishy taste.[29] The fungus is enjoyed and eaten in France and parts of Germany, where it may be sold fresh or pickled and used in sausages.[7] Similar species are consumed in China. [edit] Medicinal properties Venous thrombosis, the formation of a blood clot in a vein, is a common cause of death in breast cancer patients; patients with recurrent disease are typically maintained on anticoagulants for their lifetimes. A research study has suggested that extracts from P. impudicus can reduce the risk of this condition by reducing the incidence of platelet aggregation, and may have potential as a supportive preventative nutrition.[30] It was used in medieval times as a cure for gout and as a love potion.[7] [edit] Folk uses In Northern Montenegro, peasants rub Phallus impudicus on the necks of bulls before bull fighting contests in an attempt to make them stronger. They are also fed to young bulls as they are thought to be a potent aphrodisiac.[9] [edit] In culture Writing about life in Victorian Cambridge, Gwen Raverat (granddaughter of Charles Darwin) describes the 'sport' of Stinkhorn hunting: In our native woods there grows a kind of toadstool, called in the vernacular The Stinkhorn, though in Latin it bears a grosser name. The name is justified, for the fungus can be hunted by the scent alone; and this was Aunt Etty's great invention. Armed with a basket and a pointed stick, and wearing special hunting cloak and gloves, she would sniff her way round the wood, pausing here and there, her nostrils twitching, when she caught a whiff of her prey; then at last, with a deadly pounce, she would fall upon her victim, and poke his putrid carcass into her basket. At the end of the day's sport, the catch was brought back and burnt in the deepest secrecy on the drawing-room fire, with the door locked; because of the morals of the maids.[31] In Thomas Mann's novel The Magic Mountain (Der Zauberberg), the psychologist Dr. Krokowski gives a lecture on the phallus impudicus: And Dr. Krokowski had spoken about one fungus, famous since classical antiquity for its form and the powers ascribed to it -- a morel, its Latin name ending in the adjective impudicus, its form reminiscent of love, and its odor, of death. For the stench given off by the impudicus was strikingly like that of a decaying corpse, the odor coming from greenish, viscous slime that carried its spores and dripped from the bell-shaped cap. And even today, among the uneducated, this morel was thought to be an aphrodisiac. (wikipedia)