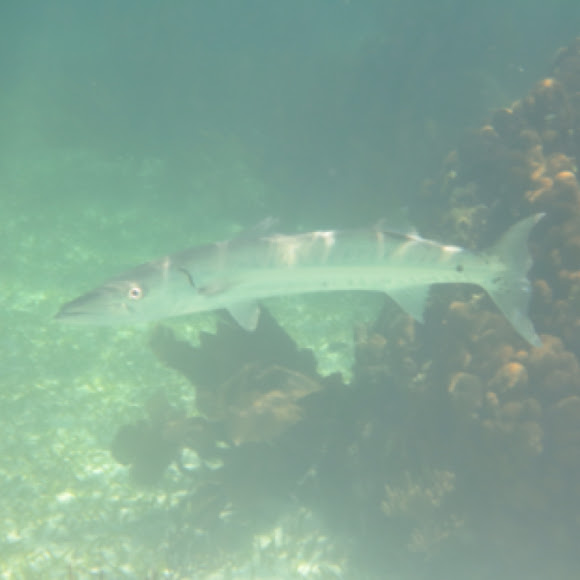 The great barracuda has a slender, streamlined body that is round in the mid-section. The top of the head between the eyes is nearly flat and the mouth is large, containing many large sharp teeth and a projecting lower jaw. The pectoral fin tips extend to the origin of the pelvic fins. The spinous and soft dorsal fins are widely separated and the double emarginate tail fin exhibits pale tips on each lobe. Body coloration of the great barracuda is brownish or bluish gray on the dorsum and upper side, with a greenish cast shading to silvery on the sides and a white belly. The upper side may have 18-23 dark bars most often observable when the fish is resting or over a variegated substrate. The black spots on the lower sides of the great barracuda distinguish it from other species of barracuda. The second dorsal fin, anal, and caudal fins are violet to black with whitish tips. Young barracuda exhibit pale reticulations on the dorsum and a dark stripe on either side that breaks into spots as the fish grows. These patterns are somewhat ephemeral though as juveniles can alter their color patterns to closely match that of their surroundings. These changes in coloration serve to camouflage the fish from predators as well as well as wary prey. Adults have similar coloration along with a more silvery appearance that is advantageous to a fish that swims near the surface of the water