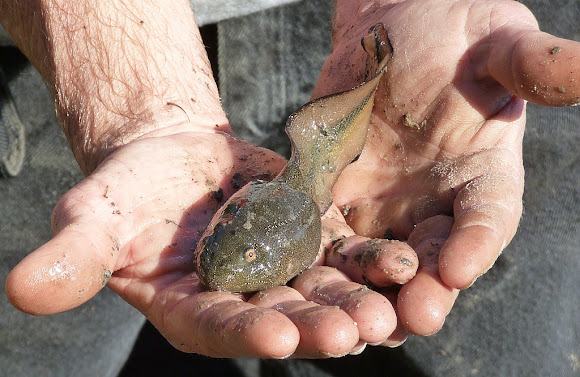 The first photo was taken just to show the large size, this is a grown man holding him. Once this photo was taken we carefully released him back with the others. The tadpole is the River Swamp Frog, Rana Heckscheri. It is the only tadpole with that black border around its tail. It is also interesting because it commonly forms schools of tadpoles. The tads are noxious, so by schooling they reduce predation by their numbers.

Along rivers and smaller streams and in river floodplains including floodplain swamps and cut-off overflow pools. Also found in cypress-bordered lakes, forested swamps, bayheads, beaver impoundments, and borrow pits. Primary requirement appears to be permanent water that is necessary for successful reproduction (i.e., metamorphosis). Primary vegetative associations appear to be bald cypress, tupelo-gum, titi, and bay (Mount 1975). Little published data. In northern Florida, breeding occurs from April to August (Allen 1938). Calls vary from a snort to a grunt and guttural roll (Wright and Wright 1949). Eggs laid as a surface film and hatch in 10 to 15 days (Allen 1938). Tadpoles prefer shallow water and are found in densely packed schools of several hundred individuals, an uncommon behavioral feature among ranid frogs (Wright 1924). Schooling behavior in tadpoles is associated with predator avoidance and food location (Altig and Christensen 1981). Tadpoles require about 10-12 months to transform, and they apparently overwinter (Allen 1938). They remain active in winter months, but growth is slower (Hansen 1957). In the Florida Panhandle, large individuals without limb buds have been observed in March and transforming individuals in April (M. Aresco, pers. observ.). Large tadpoles also have been observed in September. Newly metamorphosed specimens are about 60 millimeters (2.4 inches) snout-vent length (75 percent of adult size), a large body size relative to metamorphs of other ranid frog species. Juveniles grow rapidly during the first year (average growth rate of 8 mm [0.3 in.] per month), and probably reach mature size within one year after metamorphosis (Hansen 1957). Adults are active at air temperatures of 18o to 35oC (64.4 to 95oF) and are nocturnal, usually found sitting on the bank facing the water (Carr 1940, Hansen 1957). Adults apparently forage on land but stay close to water, probably feeding on a wide range of invertebrates, especially crayfish. When adults are captured, they become limp and relaxed in contrast to bullfrogs and pig frogs that kick and struggle vigorously (Carr 1940).

While walking along the pond next to the Aucilla River, I noticed these Huge Tadpoles! I had never seen anything like them and when I posted these photos to my Flickr account it brought on quite a stir. I finally managed to ID them thanks to a Coworker and Florida State University (FSU) Professor. I returned to this same area after a few weeks to see if I could locate any of the Frogs, but no luck. I also wonder if the many alligators found in the river and this pond didn't eat most of the tadpoles before they had a chance to fully turn. Note that it often takes up to a year (and according to other sites longer) for the transformation to be completed from tadpole to frog. The FSU professor also told me that they can lay dormant (underground) for up to three years! We have gone back to the pond several times this year, but due to the lack of rain, the pond has shrunk considerably and so far no tadpoles have been spotted. Original photos (full resolution) posted on Flickr: http://www.flickr.com/photos/maryevans/5... Resource links: http://www.dcnr.state.al.us/watchable-wi...

Seriously, that is a massive tadpole! Without that first photo I would have had no idea how huge it really was. Super interesting and informative post Mary!

saw these on the Econfina Creek October 18th, 2013. They were in pods of what looked like thousands. They would surface frequently,making popping sounds while getting air? I had never seen tadpoles this large before. They were in a deeper area so i did not exit the kayak to try to catch one. Wish I had an underwater camera. These things were huge!

great information and wow to that massive tadpole

rat.tumour aka lipase 9 years ago

Thank you Anne Marie and Matthijs...I didn't know there were any this big either, until seeing these :)

I had no idea tadpoles could be that big - wow!

That was my first reaction tibiprada - I couldn't believe what I was seeing at first, as the water's edge was black with them. There were literally hundreds.

Thanks all - I have yet to see these in this pond since these were taken. Though I always look. @shekainahdalaban you can read more about the frogs here: http://www.outdooralabama.com/watchable-... I have yet to see any of them, and have no idea where the tadpoles (or frogs) went. You can bet I will continue to look for them over the years as this river and pond are in walking distance from my home.

wow that is big!

Unbelievable that's one hulk of tadpole.Never thought a tadpole could grow so huge as this, how about the frog?

me either ikissedameow, the largest and most I have ever seen. Haven't seen any since and I keep checking that same body of water

Wow! Never seen one that huge.

They are the biggest I have ever seen too textless. Nor had I ever seen so many tadpoles in one place before. The shore line was dark black with them they were so thick.