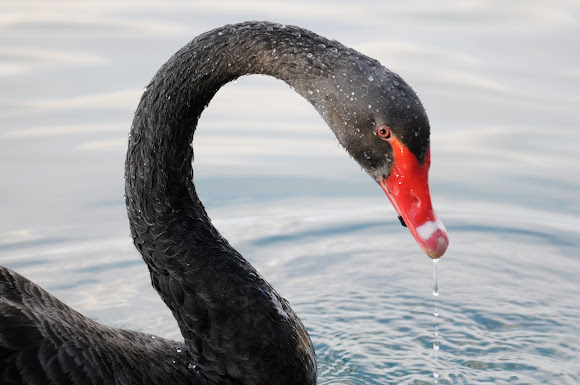 The Black Swans inhabit Lake Eola, a small lake in the center of Orlando, FL.

The Swans were first brought to Lake Eola of Orlando Florida in the late 1900's. They have been left to themselves until 2007. As a symbol of Orlando, the city took them under their protection and wanted to give them annual medical examinations and vaccinations. The city of Orlando had also decided to import other species from across the world and add to the lake to create a sanctuary for these majestic birds. There are now five species of swans at Lake Eola: Black - Australia, Mute - England/Europe, Whooper - Russia/Japan, Finland/ Europe, Black Necked - South America and Trumpeter - North America Info take from http://www.orlandokayakfishingclub.com/e...

The level of clarity on this images is amazing! Thank you so much for uploading such great spotting!

You might be interested in this Aboriginal Dreamtime story about how the swans became black (and why their beaks are red). I remember learning this at school and thinking it was such a sad story, but so beautiful. http://www.artistwd.com/joyzine/australi...