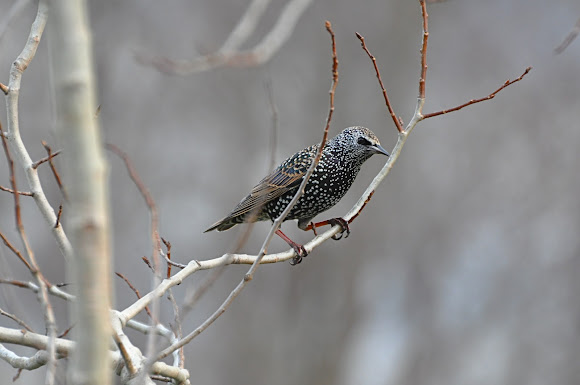 Starlings are common in towns, suburbs, and countryside near human settlements. Starlings roost and perch on wire, trees and buildings. They feed on the ground on lawns, fields, sidewalks and parking lots. They also like the suet I hang out. Because they are in groups of several birds I chase them away. They are non-migrators to partial migrators. Some will move to southern states.

Not a native bird, they were introduced to New York in 1800-91 from Europe. In flight their wings are short and pointed, making them look rather like small, four-pointed stars (and giving them their name). Nest in cavity. 2 broods per year. 4-6 bluish eggs with brown markings. Looks similar to the Common Grackle, but lacks its long tail. They are boisterous, loud, and they travel in large groups (often with blackbirds and grackles). They sit high on wires or trees making a constant stream of rattles, whirrs, and whistles. They are also able to mimic sounds.

thank you Seema and Carolina. It really is a beautiful bird.

What a beautiful bird, love the pattern.