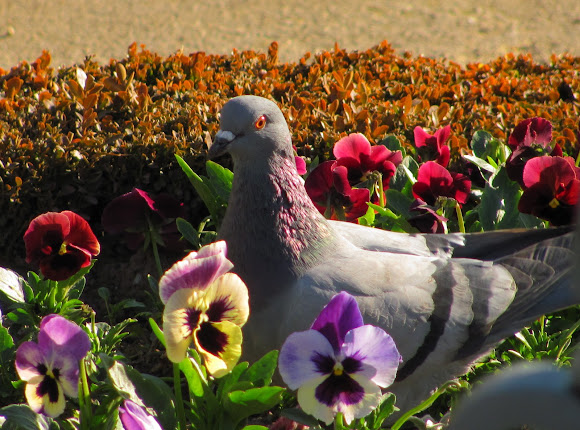 Spotted in the S.Bárbara garden.I was passing there in my ways in the city,but some how in porpuseous to se if the pansies where flowred,(the last time i spott this garden there where a douzen in at most,now it´s a sea of pansies:)but like i says passing there spotting pansies,sudently something began to move in the meadle of the flowers,the pigeons where eating something in the growd,between the plants and as you can se in the photo 3 it's not clear at first site,i like the idea that they where in some valentine mode,flerting between the pansies, because they are allready in breading season:)

I have to wait a little so they put ther heads out of the pansies:)it give me a good feeling,to began a morning of daily city work:)

How clever of you to get her to pose among the pansies Antonio!