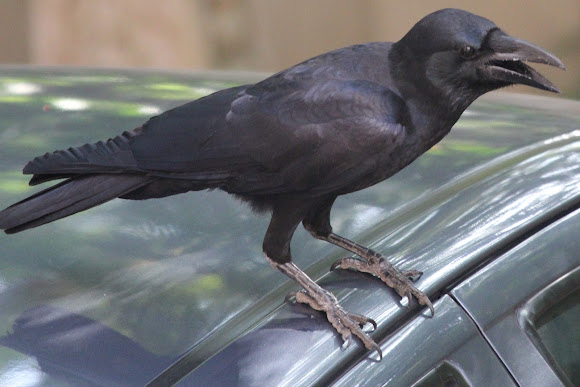 Sitting on top of my car. Maybe he needed a ride? I was unable to understand. They are very adaptable and are able to survive on a wide range of food sources making them capable of colonizing new areas due to which they are often considered a nuisance, especially on islands. It has 11 subspecies, and some of these are distinctive vocally, morphologically and genetically, leading to speculations that more than one species is involved. The overall size and body proportions vary regionally. All taxa have a relatively long bill with the upper one quite thick and arched, making it look heavy and almost Raven-like. Generally, all taxa have dark greyish plumage from the back of the head, neck, shoulders and lower body. Their wings, tail, face and throat are glossy black. The depth of the grey shading varies across its range to almost black in the Indian taxa. Extremely versatile in its feeding, it will take food from the ground or in trees. They feed on a wide range of items and will attempt to feed on anything appearing edible, alive or dead, plant or animal. It is also one of the most persistent species and is quite bold, especially in urban areas. It is well known for its regular habit of killing domestic Chickens, more so than any other species of Crow.

The range of this species is extensive and stretches from the northeastern Asian seaboard to Afghanistan and eastern Iran in the west, through South and Southeast Asia, to the Lesser Sundas and the Philippines in southeast. It occurs in woodland, parks and gardens, cultivated regions with a least some trees.

No Emma, there was no food in the car but it was being fed outside. Since Hindus believe them to be their ancestors many of us feed these crows :-)

Crows are very intelligent. Was there food inside the car?