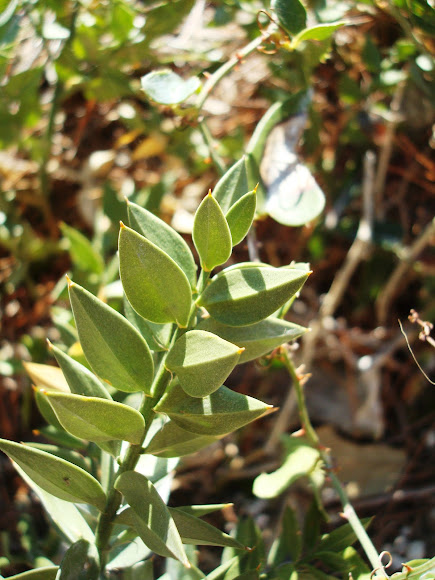 It is a low evergreen Eurasian shrub, with flat shoots known as cladodes that give the appearance of stiff, spine-tipped leaves. Small greenish flowers appear in spring, and are borne singly in the centre of the cladodes. The female flowers are followed by a red berry, and the seeds are bird-distributed, but the plant also spreads vegetatively by means of rhizomes.

It occurs in woodlands and hedgerows, where it is tolerant of deep shade, and also on coastal cliffs. It is also widely planted in gardens, and has spread as a garden escape in many areas outside its native range.

Other names: Butcher's Broom, Kneeholy, Knee Holly, Kneeholm, Jew's Myrtle, Sweet Broom, Pettigree, and really interesting Greek name from mythology Λαγομηλιά (Hare's apple). Butcher's broom has been known to enhance blood flow to the brain, legs, and hands. It has been used to relieve constipation and water retention and improve circulation. Since Butcher's broom tightens blood vessels and capillaries, it is used to treat varicose veins. It is also used for hemorrhoids.In a 1999 open-label (not blinded) clinical trial, the herb was tested as a hemorrhoid treatment and showed statistically significant positive results Purple sprouts are perfectly edible, but the red berries are toxic. For me as a vegetarian this is also once of the plants that is an important part of Easter's breakfast resembling spring!