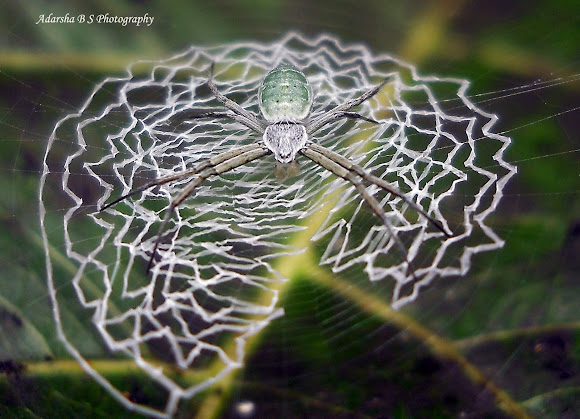 Spotted this web architecture (a classic zig-zag Stabilimenta). The purpose of the stabilimentum is still a mystery as many theories are there. It is possible that it acts as camouflage for the spider lurking in the web's center, but it may also attract insect prey, or even warn birds of the presence of the web. Only those spiders that are active during the day construct stabilimenta in their webs.

To construct the web, several radial lines are stretched among four or five anchor points that can be more than three feet apart. The radial lines meet at a central point. The spider makes a frame with several more radial lines and then fills the center with a spiral of silk, leaving a 5/16 to 3/8 inches (8 to 9.5 mm) gap between the spiral rings, starting with the innermost ring and moving outward in a clockwise motion. To ensure that the web is taut, the spider bends the radial lines slightly together while applying the silk spiral. The female's web is substantially larger than the male's, who builds a small zigzag web nearby. The spider occupies the center of the web, usually hanging head-down, waiting for prey to become ensnared in the web.

Was out angling in interior Nepal, so missed out. Congrats Adarsha, anyway!

Thank you so much everyone for lovely comments...:)

I really don't like spiders but your photo is amazing!!!

What an amazing sighting! excellent images.

Thank you Daniele and Carol.

@ Mark : Well, in Chennai, one more reason is there.. they don't celebrate because of Jailalitha's case..But yes, when it comes to nature, fireworks should be banned.. :)

Well good on them for doing that. In Chennai it was all about the thousands of people who needed hospital treatment. :)

Thank you so much James, Ashutosh, Dilan, Mark and Twinno :)
@ Mark : thank you for lovely wish. Fireworks not completely banned, but young people are protesting for the sake of environment :)

Thanks to carol and Leana :)

Congrats on this brilliant mandala Adarsha.. and have a fabulous Diwali. Have they banned fireworks in your area? (like they have in Chennai.. grrr)

Congrats on SOTD, wonderful image and I love the way the spider stands out on the web. Great job!

Thank you so much Yasser..i am very happie for the honor...:)

Congrats Adarsha in your great SOTD!