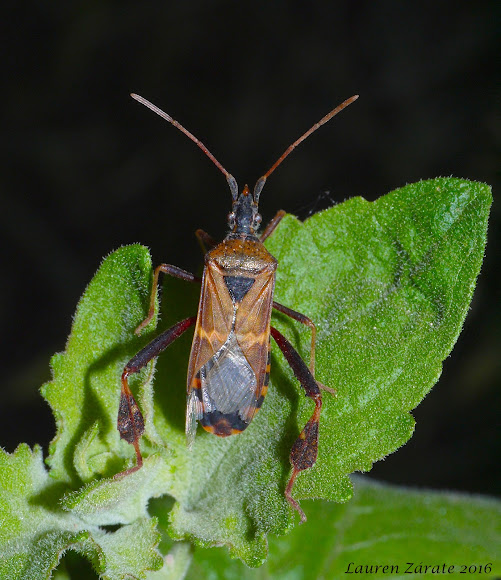 Large Coreid Bug, the Western Leaf-footed Bug, was found on a bush half way to the top of Angel's Landing, in a shaded forested area. Note the prominent orange spine on the head between the antennae. This one has orange abdominal bands and a pale orange, but distinct wavy line across the elytra. The antennae are unicolor. About 2.5 cm long. Family Coreidae.

Surprisingly, there are now 61 species of Leptoglossus! L. occidentalis is probably the most often seen and now also occurs in Europe as an invasive species. This species, L. clypealis is quite distinct from L. occidentalis, with more pronounced markings and a much longer spine on the front of the head (among other differences). The following revision of the species of Leptoglossus by Brailovsky in 2014 gives a key and dorsal drawings of all species. http://www.ib.unam.mx/m/documentos_de_ac.... See also: http://naturalista.conabio.gob.mx/observ... http://bugguide.net/node/view/434624/bgp... http://bugguide.net/node/view/1135873/bg...

Thank you bayucca. I am disappointed in myself for not doing a good job on this one. It is definitely L. clypealis and I ran it through the key of Brailovsky. The two species are not that similar and I should have been more careful. Thank you so much for bringing it to my attention.

Yes! I'm a dinosaur fanatic and it was really neat. The Navajo lady that showed us the tracks was really knowledgeable and she carries a squirt bottle of water and wets the tracks to see them easier. There were also copralites and eggs (both dinosaur and of an extinct crocodile), some bones and skulls. And a huge 2 meter diameter ancient turtle fossil (belly up). The whole area is speckled with "bloodstone rocks" which are actually root fossils of an extinct tree.

That does sound like a beautiful trip! That is a lot to see in one trip! How did you feel when you saw the dinosaur tracks? Takes one back into times ,isn't it?

Thank you Hema! Yes, it was wonderful! We visited Zion, Bryce, Arches and Grand Canyon National Parks, Monument Valley, Antelope Canyon in Page Arizona and the Dinosaur tracks in Arizona. There was so much more we wanted to see but didn't have the time. The whole area is one of the most amazing places in the entire world! Loved it all!

beautiful! Did you enjoy your trip to Utah?