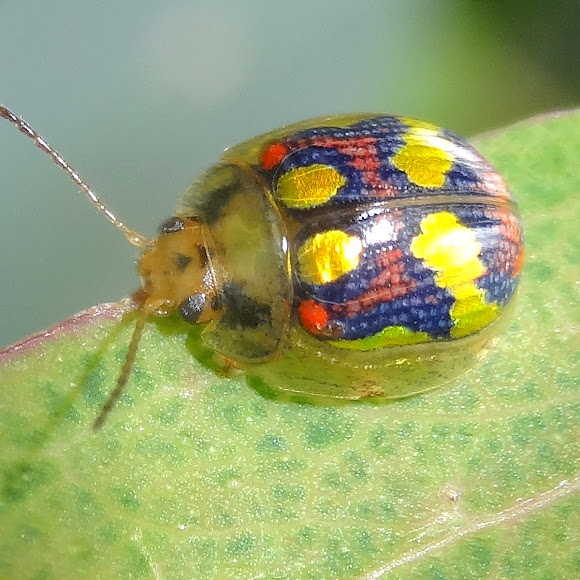 Big smiles today because this much sought after beetle was found in our back yard. The first one I saw also saw me and did it's usual trick of falling into the grass below. (some swearing) After many long minutes I found a second one and was a lot more careful.
About 10mm long the lower elytra and pronotum is almost clear while the top has magnificent patterns in rich blue, red and yellow.

On Eucalyptus microcarpa? in an outer urban back yard.

The mix and placement of blue, red and yellow can vary considerably in this species and might give rise to confusion with another one, Paropsisterna annularis.
family: CHRYSOMELIDAE
subfamily: Chrysomelinae
http://bie.ala.org.au/species/Paropsiste...
Apparently these little beauties were inadvertently taken to NZ with plantation eucalyptus and became a pest problem there. A tiny parasitic wasp (Enoggera nassaui) was introduced and seems to be having some results.

Glorious indeed! Glad you were able to get some images of this beauty!

Thanks all for positive comments. Yes lucky this genus is amusing with so many so alert and so ready to just drop. :)

Great story to go along with such a pretty little guy!

Yes indeed. The apical blotch extending outwards obliquely hindward and continuous with the lateral vitta or nearly so.
This makes Diannes image look more like annulus.

Thanks Pam. Martin are we still working with the descending angle of the yellow patch theory?.. :)

Got SOTD written all over it me thinks!

Well done Mark. They are very nice to see.
You will notice from my images on ALA that one is gloriosa, next is annularis and the third, with two in the image are annularis and nobilitata. The Queensland image by Dianne is possibly correctly named by Ken Walker but does not fit the original Blackburn description well enough for me to have an opinion.

Thanks James. Only been waiting 2 years to see these. :)

Thanks Charlie and Ernst. Funny.. my camera died just after these and I didn't care much. :)

What a beauty !!! the things we find in our own yard....i would have been smiling too ! Great set

Thanks gals. Made my day.

What a Sunday treat .. love its little feet in image 2. Nice series of images : )

Exciting find ! Well done and so happy he/she's in our backyard. Those colours still amaze me..