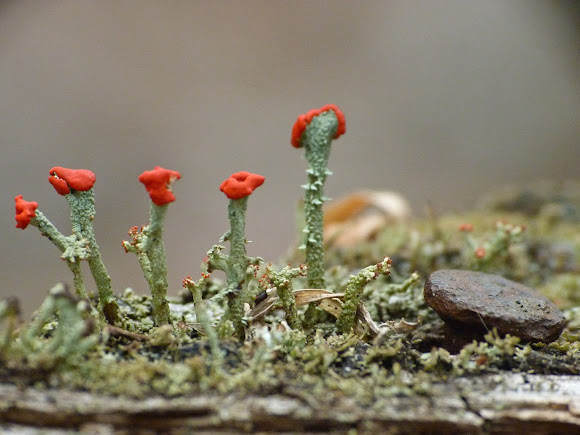 ladonia cristatella is a very common and well known lichen, found throughout the northeastern USA into Canada. There are look-alike species throughout most of the world as well. The little red "caps" that resemble the red hats worn by invading British troops during the American Revolutionary war give the lichen its common name of the the "Bristish Soldier Lichen." In reality, the red hats are actually the sexual fruiting structure of the lichen, the apothecia..

See the last photo for size comparison with my index finger & photo 3 with a nail head.

Lovely sighting Karen, I invite you to join my mission, http://www.projectnoah.org/missions/3823... , and add this and any other lichens you may come across.

very interesting and quite lovely ! Thanks Karen

Thanks Ashish! I've actually changed the photos round now so the one with the nail head is the main image because this one does show just how tiny this is!
Soul searching wind, I hope you are going to post some photos too!

So glad you put this is up, now I know he type that has been growing on the fence. Great photos.

Love your presentation... Here we learn what can be very small Lichen look like...!!

Thank you Alice! I'm loving this whole new world that macro is opening up to me!

Thanks Argybee! Apparently it is quite common but this is the first time I've seen it.