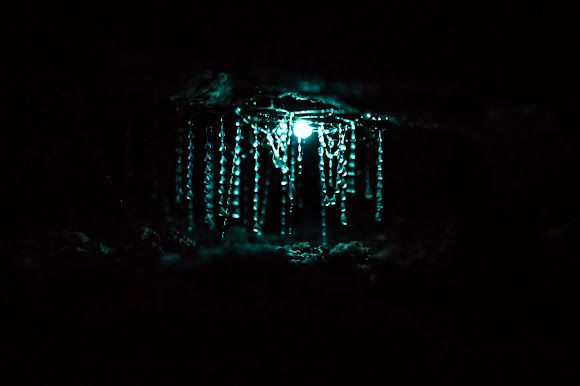 Found in a crack in a rock face next to a creek.

Glow worms produce sticky drops of mucus, which they hang from the roof of a ledge. They product biolumenescence, which attracts insect prey that get ensnared in the mucus.

Wow! I missed this one .. great SOTD Boaz ... Congratulations!

Awesome Boaz,just beautiful,congrats on the well deserved SOTD and thanks for sharing

I am from India....and our festival of lights is approaching (Diwali) and all houses will soon look like this....looks like you kick-started the season. Fabulous shot. Thank you for sharing and Congrats on the SOTD.

Thanks everybody for your encouraging comments!

And thanks to lori.tas for the awesome little description below which we used in our FB and Twitter posts!

Congrats Boaz! This wonderful snapshot has earned you Spotting of the Day! Thanks for sharing and we can't wait to see what you spot next.

Spectacular ! Well done and thanks for sharing.

I hadn't heard about this!!Thanks for sharing!!

Great photo, could be the front cover of a sci-fi

Awesome spotting, Boaz. Thanks for sharing.

Excellent. I keep meaning to get down to Hastings cave and see them here in Tasmania. Good job of lighting them. You might put in your description that "glow worms" are actually the carnivorous larvae (or maggot) of a mosquito-like fly. They use that sticky string to catch flies to eat.

Awesome! I've always wanted to see these in real life.

Welcome to Project Noah, Boaz N,
I hope you like the site as much we do; there are many features you can explore:
I invite you to go to http://www.projectnoah.org/faq where you will find the purpose and “rules” of Project Noah.
There is a blog http://blog.projectnoah.org/ where we post articles from spotters with special insight into different organisms.
There are also the chats for help with identification, and to comment on your own and others’ spottings.
Look at the global and local missions to put your spottings into:http://www.projectnoah.org/missions
Enjoy yourself here, see you around!