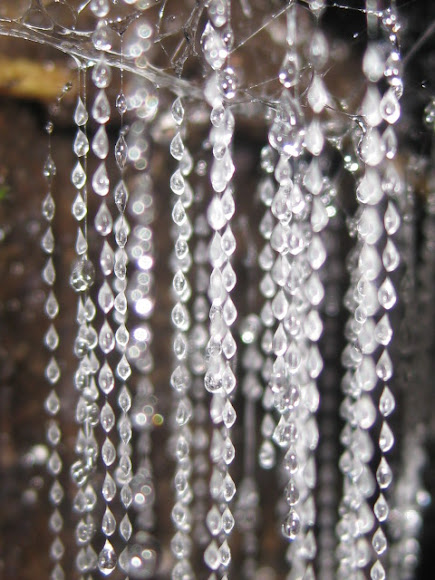 Glow-worms make sticky silk threads which hang like fishing lines. Small flying insects are attracted to the light of a glow-worm, and get caught in the threads. The glow-worm pulls in the thread with its mouth and eats the insect. In the bush the lines are 1–2 centimetres long. In caves, where there is no wind to tangle the threads, the lines may be up to half a metre long. A large glow-worm larva may have as many as 70 lines.

They look like some species from the movie "Avatar"!

@ dotun55 the worms are on horizontal threads to the vertical drops. They are transparent so very difficult to see! No they are not the larvae of fireflies. There is a link attached to this spotting for more information on these fascinating creatures

Wonderful! Where are the larvae themselves and are they larvae of fireflies?

I took these pics with my little Canon ixus camera :) I was very lucky it was a still day as the slightest breath of wind makes them move. I've tried to take more photos recently but never had the success I had with these shots!

how did you get an amazing picture of a glow worms webs?

How fascinating! Great set of pics

Such an interesting subject! Congratulations on Spotting of the Day! Wonderful.

Congratulations JulieEdwards on the SOTD. Really cool spotting. It looks like a string of beads, very pretty.

Wow! This is so interesting! Congratulations on the SOTD, well deserved. It looks like something out of a fantasy movie.

WOW! I never knew anything about this. Thanks! Awesome spot and congratulations!

Congratulations! I'd love to see this in person

and 78 other people favorited this spotting