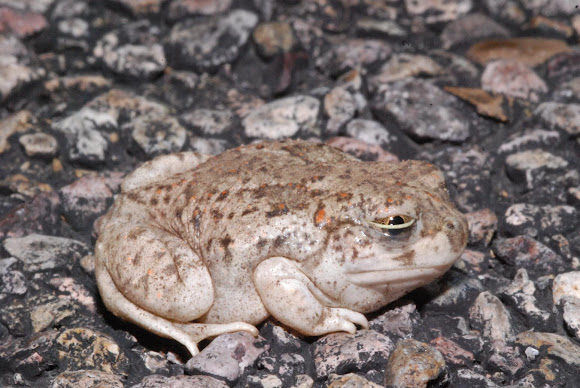 Large adult Mexican spadefoots are about 2.5 inches in length. They are brown, grayish-green, or grayish-brown with dark spots or blotches on the back. Faint light stripes may be present on the back and sides, and red-tipped tubercles are scattered over the back and head. Like other spadefoots, the Mexican spadefoot has large eyes and a short wedge-shaped horny tubercle on the bottom of each hind foot, which it uses to dig its way into the ground. It is similar to the Plains and Great Basin spadefoots; but Mexican spadefoots lack a boss between the eyes (Plains spadefoots have a bony boss, while Great Basin spadefoots have a glandular boss). Mexican and Great Plains spadefoots smell like peanuts when handled (Plains spadefoots do not). Tadpoles have broad, flat heads with eyes high on the head. They can grow to nearly 3 inches, but most metamorphose before reaching 1.5 inches. Dorsally, tadpoles are light gray to olive or brownish-olive in color. Both carnivorous and omnivorous tadpoles occur; the former is induced by eating fairy shrimp and develop an exceptionally broad head, large jaw muscles, and a short gut. (from http://www.reptilesofaz.org)

Prior to the mid-1970s, the Mexican Spadefoot was considered a subspecies of the western spadefoot toad (S. hammondii) of California. Creation of stock tanks and places along roads and railroad tracks where water accumulates may have allowed this species to colonize areas that historically failed to provide standing water long enough for metamorphosis. The Mexican spadefoot hybridizes with the Plains spadefoot and rarely with Couch’s spadefoot. (from http://www.reptilesofaz.org)