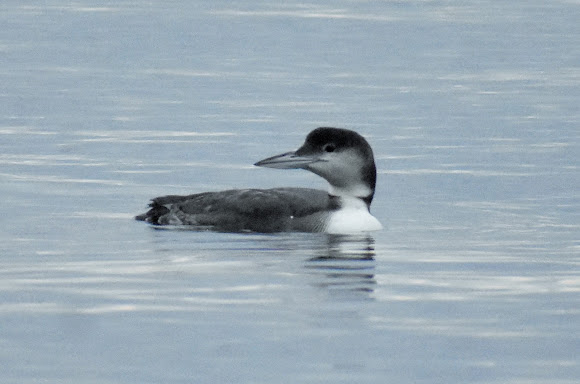 Adults in non-breeding plumage are brownish gray with white throats and breasts, partial white collars, and white around the eyes. Under-parts are white in all plumages. Juvenile plumage is similar to non-breeding.

It is not known if the population of Common Loons in Washington is increasing, stable, or decreasing. Common Loons have declined in Washington in the last century, but there are no good data on their historic distribution in the state. Records of known nesting have increased in the past 15 years, but this may be due to increased sampling efforts. Because there are known threats and the species is recognized as vulnerable, Common Loons are classified as a state 'sensitive species' by the Washington Department of Fish and Wildlife. The Gap Analysis Project also lists it as a species at risk. Pesticides, mercury contamination, and lead poisoning are all potential threats. Oils spills are also a threat, especially since loons dive rather than fly when they encounter oil slicks. Common Loons avoid densely populated areas, thus development of lakes and the resulting increase in boat traffic have resulted in a decrease in available habitat. Jet skis are a major disturbance to loons in that they are fast, loud, and can maneuver in shallow areas where loons nest. The decline of Common Loons continent-wide has aroused extensive public concern and action, and breeding conservation programs are in effect over much of their range. Many populations have responded to this effort. In Washington, there are 20 confirmed Common Loon nesting locations, and 8-10 nests were found each year in the 1990s. Common Loons do not breed until they are 5 years old, and often not until 7 or older. This delayed breeding results in low productivity, making it harder for the population to rebound from declines.(birdweb)