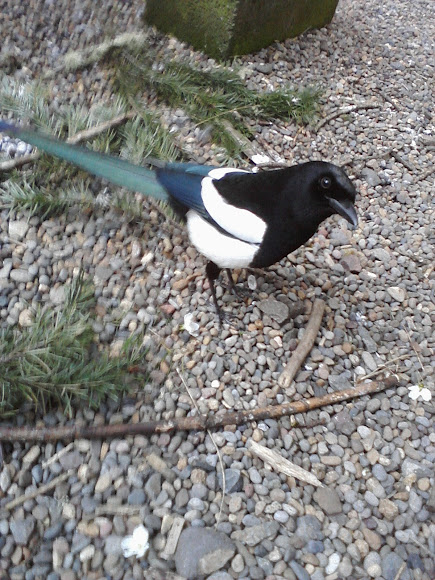 Magpies are one of the most intelligent animals on the planet. Magpies have shown complex emotions, including grief. They have been documented holding 'funerals' for fallen comrades, by circling the body, dancing, chirping, and even laying flowers near it. This spectacle lasts from 5-15 minutes. They also have episodic-like memory, making it possible to cache food (and brightly colored objects!) across seasons. Black-billed Magpies are very close relatives to European Magpies, who have been found to possess mirror self-recognition, an ability previously thought to be possessed by higher-level mammals only. European Magpies also have a neostriatum, an inner part of the frontal brain, approximately the same relative size as humans.

Black-billed Magpies prefer thickets with scattered trees or riparian groves. They have also been found in developed areas.

No problem. Grief is a very complex emotion, and though many animals show some signs of mourning, none do so as obviously and elaborately as magpies! It really 'humanizes' them, to me, anyway.

Thanks for the interesting information; especially about grief.

Wow! Nice bird and amazing description. Thanks for sharing.

I wouldn't be surprised. Their intelligence makes them very desirable study subjects in the bird world!

I lived in Boulder Colorado for a couple years and loved to observe them during my hikes in the mountains. Most of the Magpies I saw had red and white plastic leg bands, as if they were being studied by someone...

I love these. So fascinating.

Nice photo, and I compliment you on your interesting description :)