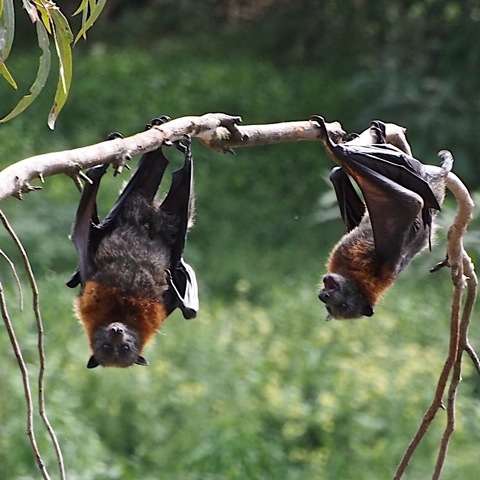 The grey-headed flying fox (Pteropus poliocephalus) is a megabat native to Australia. This flying fox has a dark-grey body with a light-grey head and a reddish-brown neck collar of fur. Bats are mammals that suckle their young and congregate in large groups called 'camps'.

Yarra Bend Park contains some of the last stands of original bushland in inner Melbourne, with approximately half of the park covered by indigenous vegetation. The park supports around 290 species of indigenous plants and is defined by two broad vegetation groups: Plains Grassy Woodland and Valley Grassy Forest. The grey-headed flying fox is endemic to the south-eastern forested areas of Australia, principally east of the Great Dividing Range.

At sunset, the bats begin to leave Yarra Bend Park, Kew. First one, then ten, then hundreds and hundreds of bats stream out of the trees into the sky. With a colony of between 10,000 and 50,000, this takes up to an hour. The flying fox is an important means of pollinating our forests and woodlands. It does this by transferring pollen on its fur from tree to tree, and by eating and, ahem, pooing out, seeds. Grey-headed Flying-foxes are an important part of Melbourne’s wildlife. They used to roost in the Royal Botanic Gardens but their presence there was not sustainable due to the sensitive nature of the vegetation. The colony was relocated to Yarra Bend Park in 2003. Yarra Bend Park is now the permanent roost site.

That last picture is awesome!

thank you Noel. Amazing how many there are in this camp, eh?

Please view the last photo to see the unbelievable amount of bats in this camp!