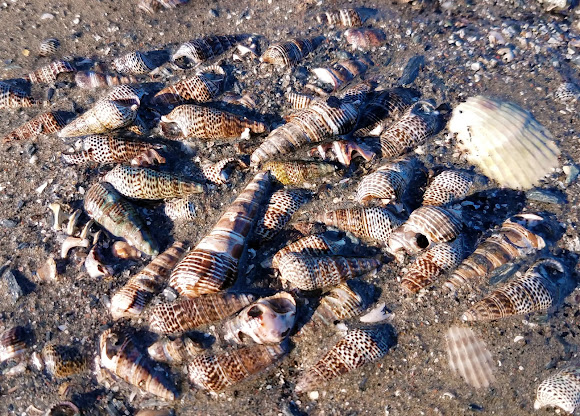 Batillaria attramentaria is a species of sea snail most often found in the salt marshes and mudflats of marine, estuarine, riparian and wetland habitats. Introduced to North America between the 1920s to 1930s via the coasts of Washington and California, the Japanese mud snail became an invasive species notorious for reducing biodiversity by outcompeting the native hornsnail Cerithidea californica. (Wikipedia)

Spotted on a shallow mud/sand beach at Padilla Bay. There was thousands of them!

Awwwww. That is disappointing. But, still an exciting find....I think.

WOW!! I love finding these lil guys on the Gulf beach in Florida. Probably a different species - I just call them "corkscrew" shells.
The amount you found is INCREDIBLE!!