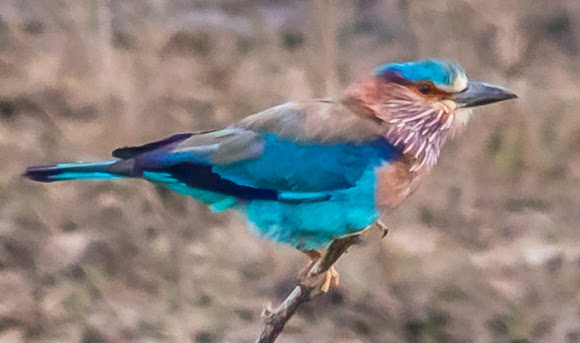 The Indian roller (Coracias benghalensis) is a bird of the family Coraciidae, the rollers. It occurs widely from West Asia to the Indian Subcontinent. It is 30–34 cm (12–13 in) long with a wingspan of 65–74 cm (26–29 in) and a weight of 166–176 g (5.9–6.2 oz). The face is rufous-white, the throat and breast pinkish, head and back are brown, with blue on the rump and contrasting light and dark blue on the wings and tail. The bright blue markings on the wing are prominent in flight. The sexes are similar in appearance. Two subspecies are recognised. The Indochinese roller was formerly included as a subspecies. Often seen perched along roadside trees and wires, the Indian roller is common in open grassland and scrub forest habitats, and has adapted well to human-modified landscapes. It mainly feeds on insects, especially beetles. The species is best known for the aerobatic displays of males during the breeding season. Adult males and females form pair bonds and raise the young together. The female lays 3–5 eggs in a cavity or crevice, which is lined with a thin mat of straw or feathers. Several states of India have chosen the species as their state bird. It is listed as a species of least concern on the IUCN Red List. The Indian roller is a bulky and broad-winged bird with a large head and short neck and legs. It has a body length of 30–34 cm (12–13 in) with a wingspan of 65–74 cm (26–29 in) and weighs 166–176 g (5.9–6.2 oz). The bare skin around the eyes is dull orange, the legs and feet are yellow-brown. The bill is tinged with brown at the base. The iris is grey-brown. The plumage on the forehead, chin and lores are pinkish buff, the ear coverts are darker red-brown with pale cream or pinkish streaks, while the throat is a dull wine-red with narrow cream streaks. The crown and nape are a darker dull turquoise. The back and rump are a bright turquoise, and the belly is pale blue. The tail coverts are dark purple-blue with turquoise tips. The middle two tail feathers are greyish blue-olive with black shafts, while the surrounding tail feathers are an intense purple-blue with a broad pale blue band and greenish tinge towards the tips. The flight feathers on the wings have the same purple-blue colour of those on the tail, with a similar pale blue band across the most distal five or six primaries. The underwing coverts and axillary feathers are pale blue, while the upperwing coverts are a dull green-blue. The primary coverts are pale blue with olive or purple-blue tips, and the lesser coverts are purple-blue along the leading edge of the wing. The colours look dull when the bird is perched but become vibrant in flight. Moulting commences anywhere from mid-June to mid-August and concludes between November and the beginning of March. Scan of Indian roller feathers, a primary, two outer secondaries and two tail feathers. The blue colours of the flight feathers are structural and are produced by microstructures in the barbs that produce blue through scattering, which C.V. Raman noted in the 1930s as being more complex than can be explained by the Tyndall effect. Studies in 2010 found the feather barbs structured like a channel with rods of β-keratin containing rods of 100 nm (3.9×10−6 in) diameter with airspaces between them of the same width. Adult males and females are similar in appearance and there are no seasonal changes. Juvenile birds are duller, paler and browner in colour, with a dull green crown and dull green-blue belly tinged with buff. The bill is brown with a yellowish base rather than black

thanks Brian. I appreciate all of your faves. BTW I just put up the last of my travel albums. I don't get to travel to exotic places anymore and the opportunities where I live I a lot more limited, so I'm glad you enjoyed what I have shared so far. I have some good captive photos from Indonesia, and Botanic Gardens (important ones) in Indonesia and Singapore, but I have mixed feelings about posting those.

I wish I could help you jazz.mann but I don't know much about rollers and while I was researching I found conflicting info on the range for the Indochinese roller. Hopefully someone chimes in soon to help you.

At first I thought this was Indian Roller, but now I am thinking Indochinese roller. Any thoughts anyone?