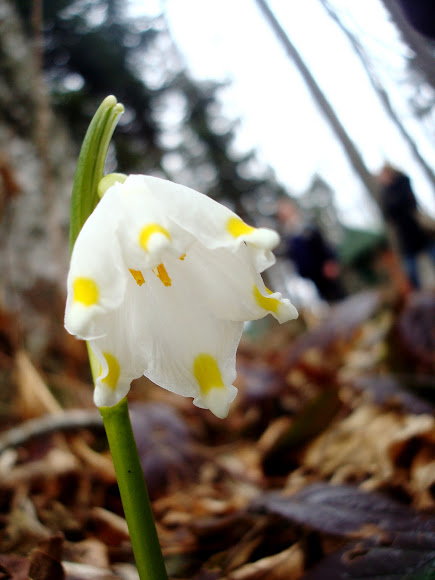 The flowers are small and bell-shaped, white with a green (or occasionally yellow) spot at the end of each tepal. They have a slight fragrance.Normally grows 15-20 cm tall , though it may reach up to 35 cm. It flowers one or two weeks later than the snowdrops, i.e., from mid-February to March, as soon as the snow melts in its wild habitat. Two varieties are known: L. vernum var. vernum with green spots on its tepals, and L. vernum var. carpathicum, which originates from the eastern part of its natural range, a larger plant with yellowish spots on its tepals; 'vagneri' from Hungary is a robust variant of var. vernum, often with two flowers per stem.

The snowflakes are native to central and southern Europe, from the Pyrenées to Romania and western Russia, but they have been introduced and have naturalized in many other areas, including the east coast of North America. They have narrow, strap-like, dark green leaves. This one was found on the altitude about 1 000 m