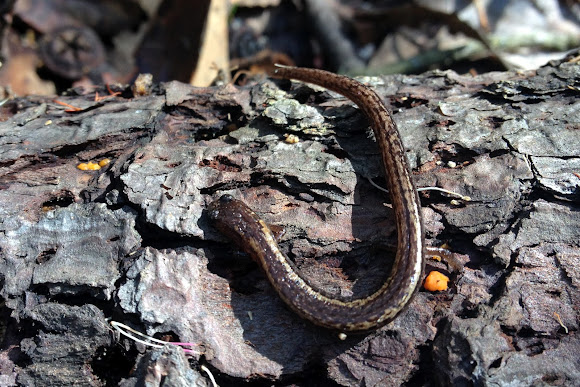 A small slim salamander with 18 -21 costal grooves. Short limbs, a long slender body with a narrow head and a long tail, and conspicuous costal and caudal grooves give this species the worm-like appearance typical of most Slender Salamanders. Variable in color; generally black or dark above, with red, brown, yellow, or tan coloring forming a dorsal stripe, sometimes with a herringbone pattern. The venter is dark, with fine white speckles. There are four toes on the front and hind feet, which is also typical of Slender Salamanders. (Other California salamanders have five toes on the hind feet.)

Found in a variety of habitats: chaparral, woodland, grassland, forests, urban yards, vacant lots, marshes, and beach driftwood. Generally found in moist locations, under logs, rocks, bark, leaf litter, stumps, debris. Can be very abundant in an area. Endemic to California and extreme southwest Oregon. Occurs from central California south of the Bay Area in San Benito County, north along the coast and coast ranges into Oregon and in the foothills of the Sierra Nevada mountains from Butte County to Calaveras County. Isolated populations occur in scattered areas in the northern Central Valley and in Shasta County.

This species is quite common in my area, but this is one of the larger, more nicely marked specimens I have seen.