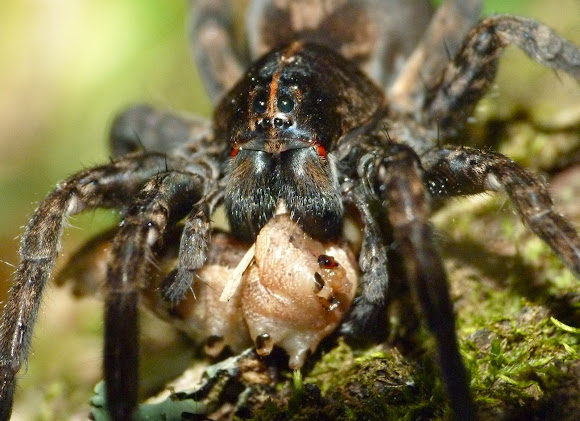 Hogna carolinensis, also known as the Carolina wolf spider, is usually regarded as the largest of the wolf spiders found in North America. The body length of females is typically 25 millimetres, and the body length of males is typically around 19 mm. Members of this species are known to live in burrows that they dig. The undersides of the cephalothax and the abdomen are both solid black. Their large eyes reflect light well, so that they are sometimes hunted at night using a flashlight. While the appearance of these spiders may seem rather forbidding, they are not inclined to bite. They flee anything larger than themselves, and generally will bite humans only if they feel threatened and are unable to escape. They do have large fangs that can create mechanical injury to other creatures, but their venom is not regarded as medically significant. A bite by one of them is sometimes described as about as painful as the sting of a bee or wasp. These spiders are large enough to easily capture grasshoppers, crickets, and other such large agricultural pests. They are ambush predators that may wander about after dark in search of prey. They are poor climbers, so that in nature they generally remain on the ground, hidden under natural shelters such as the edges of rocks, or in their own burrows.

This huge wolf spider was not happy about being photographed & even reared up at me at one point! She was not going to relinquish her juicy caterpillar at all!

Oh wow i haven seen this one incredible shots :):)

Karen great 1000 spotting congrats and sorry i missed the ocasion in the day :( i'am beeing to busy :)

Thanks Carol! We first saw her when we saw the her eyes light up from the flashlight!
Jacob, I used a macro converter - I have a Raynox 250 which just clips on the front of my leans so it is really fast & easy to fit. Usually these spiders wont let me get so close which is why I often pick them up & put them in an empty yoghurt pot while I photograph them (& put them back exactly where I found them afterwards). I think this one stayed put because she was "fixed" by the flashlight, & also because she had such a hefty mean which she obviously had no intention of leaving behind!

Fantastic series. And #1000. This is such a great macro and the lighting makes the photos so clear and crisp.

You have helped ID some the arthropods I have spotted, I couldn't help returning a favor! How could you get this close to the spider?

Thank you ulvalactuca!
Thanks Jacob for the comment & ID - I thought it was the Carolina too but the markings were a more intense orange than I have seen & I didn't have my spider guide with me!