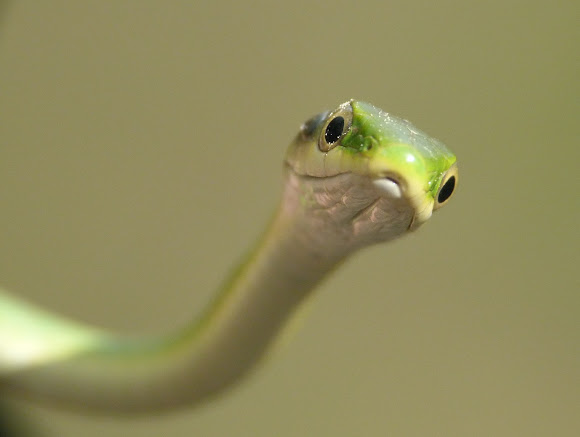 This little guy was the cutest snake I have seen here & also very docile & easy to handle. The only problem I had was getting a decent photo of him as he kept eye contact with me nearly the whole time & turned to face me every time I tried to get a different angle!

It is really cute! Amazing snake and photo too!

S/he was definitely very curious! :)

He looks so happy and curious. :3

so so cute love it so much

what a cutie!!!! i love his eyes and soooo small wow!

Thanks Parag - I think this little guy was curious about me rather than friendly. It is possible he had a previous brush with a "human" (though it's unlikely as this was private land) & had no reason to fear me. But whatever the reason - it was a delightful encounter for me!

wonderful..
i never thought snakes are so friendly too..

its a cutest little thing i've ever seen

I hadn't noticed that Jacob! This guy was very much alive luckily!

Upon Lisa Powers' comment, I wonder why the marking on the head is blue? Obviously, it is not part-dead! :)

Thank you Joshua!
Vicki, this little guy was even cuter in the flesh! It was also extremely curious about me & the camera & didn't seem to be in the least bothered about being handled!

wow! this is super cool

This is the first time in my life I have said this, but that snake is down right cute! I love that look! This is a great photo!

How interesting Lisa! I'm please that this little guy was a healthy shade of green!

These snakes are one of my very favorites! I just love that lime green color. However, upon death, these snakes turn blue! It has to do with having 2 layers of chromatophores. The yellow pigment, which combines with a blue pigment to make the snake's skin green in life, breaks down quickly after death. Only the blue pigment remains, so the snake's body changes color shortly after death.

You're welcome Lisa!
I have some salamanders for your other mission too!

Thanks for adding this to the Tennessee Snakes Mission!

and 103 other people favorited this spotting