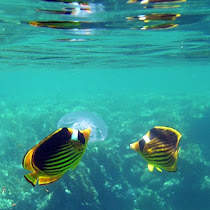 A collection of the marine life found in the Red Sea, including associated gulfs and inlets. Share photos of the fish, coral, molluscs, sea grass, marine mammals, etc. that you spot. Sign in to join mission

The Red Sea is a seawater inlet of the Indian Ocean, lying between Africa and Asia. The connection to the ocean is in the south through the Bab el Mandeb strait and the Gulf of Aden. In the north, there is the Sinai Peninsula, the Gulf of Aqaba, and the Gulf of Suez (leading to the Suez Canal). The Red Sea is a Global 200 ecoregion. The sea is the habitat of over 1,000 invertebrate species, and 200 soft and hard corals. It is the world's northernmost tropical sea. More than 1200 species of fish have been recorded in the Red Sea, and around 10% of these are found nowhere else. This also includes 42 species of deepwater fish. ~ wiki