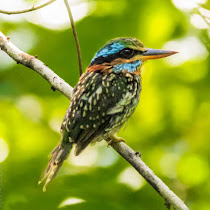 Wild Birds of the Philippines

Post pictures originally photographed by you in the wild within Philippine area of responsibility. This would include wild avian from forestal or urban sitings of endemics, migrants, globally threatened, critical, endangered, vulnerable, introduced species (but in wild status), and momentarily captured but (strictly) released after properly recorded. Photos of same specie are still acceptable provided they are not same bird recorded at same time and of same place (governed by 5 pictures per submission). This would exclude all captured birds other than momentarily captured stated above, in cages, chained, or pets. Pictures taken other than you is not acceptable as you cannot vouch for the authenticity of the image. Sign in to join mission

Philippines is a collective 7100 tropical islands comprising the Luzon, Visayas Mindanao Group of Islands. It was ones told by Robert Kennedy, Timothy Fisher, et al. as still among the most poorly known in the world of ornithology though richly diversified by about 600+ endemic and migratory birds. But in the event of avian awareness spearheaded by Haribon Foundation Inc. in 1972, birdwatchers began observing and recording avian sights and sounds. Since then, several clubs, organizations and individuals advocated birding. Sometime in September 2012 the Wild Bird Photographers of the Philippines was organized throughout the archipelago to build better avian records in the Philippines.